My romance with Lalla, by 'Dr Who' 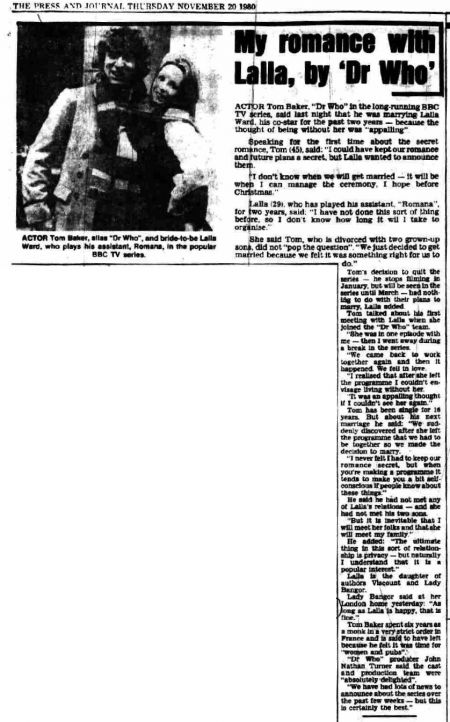 ACTOR Tom Baker, "Dr Who" in the long-running BBC TV series, said last night that he was marrying Lalla Ward, his co-star for the past two years-because the thought of being without her was "appalling."

Speaking for the first time about the secret romance Tom (45), said: "I could have kept our romance and future plans a secret, but Lalla wanted to announce them.

"I don't know when we will get married - it will be when I can manage the ceremony, I hope before Christmas."

Lalla (29), who has played his assistant, "Romana", for two years, said: "I have not done this sort of thing before, so I don't know how long it will take to organise.

She said Tom, who is divorced with two grown-up sons, did not "pop the question". "We just decided to get married because we felt it was something right for us to do."

Tom's decision to quit the series - he stops filming in January, but will be seen in the series until March had nothing to do with their plans to marry, Lalla added.

Tom talked about his first meeting with Lalla when she joined the "Dr Who" team.

"She was in one episode with me then I went away during a break the series.

"We came back to work together again and then it happened. We fell in love.

"I realised that after she left the programme I couldn't envisage living without her.

"It was appalling thought couldn't see her again."

Tom has been single for 16 years. But about his next marriage he said: "We suddenly discovered after she left the programme that we had to be together so we made the decision to marry.

"I never felt had to keep our romance secret, but when you're making a programme it tends to make you bit self-conscious if people know about these things."

"But it is inevitable that I will meet her folks and that she will meet my family."

He added: "The ultimate thing this sort of relationship privacy but naturally I understand that it is a popular interest."

Lalla is the daughter of authors Viscount and Lady Bangor.

Lady Bangor said at her London home yesterday: "As long is Lalla happy, that is fine."

Tom Baker spent six years as a monk a very strict order to France and said to have left because he felt it was time for "women and pubs".

"Dr Who" producer John Nathan Turner said the cast and production team were "absolutely delighted". "We have had lots of news to announce about the series over the past few weeks but this is certainly the best."