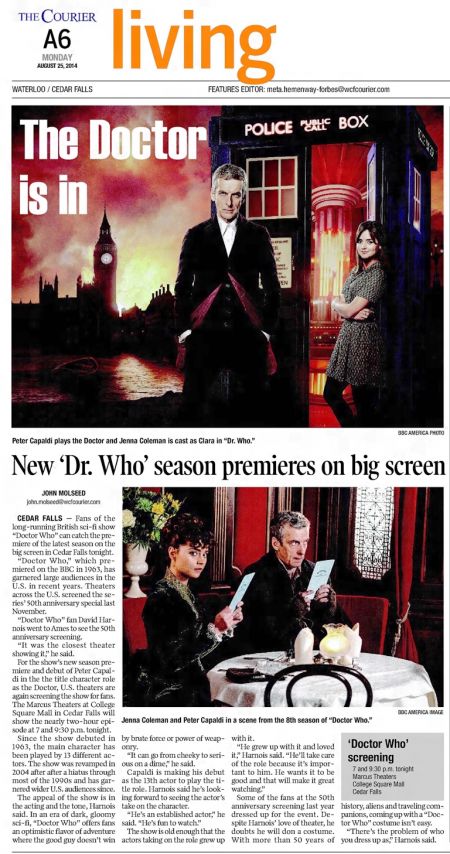 CEDAR FALLS — Fans of the long-running British sci-fi show "Doctor Who" can catch the premiere of the latest season on the big screen in Cedar Falls tonight.

"Doctor Who," which premiered on the BBC in 1963, has garnered large audiences in the U.S. in recent years. Theaters across the U.S. screened the series' 50th anniversary special last November.

"It was the closest theater showing it," he said.

For the show's new season premiere and debut of Peter Capaldi in the the title character role as the Doctor, U.S. theaters are again screening the show for fans. The Marcus Theaters at College Square Mall in Cedar Falls will show the nearly two-hour episode at 7 and 9:30 p.m. tonight.

Since the show debuted in 1963, the main character has been played by 13 different actors. The show was revamped in 2004 after after a hiatus through most of the 1990s and has garnered wider U.S. audiences since.

The appeal of the show is in the acting and the tone, Harnois said. In an era of dark, gloomy sci-fi, "Doctor Who" offers fans an optimistic flavor of adventure where the good guy doesn't win by brute force or power of weaponry.

"It can go from cheeky to serious on a dime," he said.

Capaldi is making his debut as the 13th actor to play the title role. Harnois said he's looking forward to seeing the actor's take on the character.

The show is old enough that the actors taking on the role grew up with it.

"He grew up with it and loved it," Harnois said. "He'll take care of the role because it's important to him. He wants it to be good and that will make it great watching!'

Some of the fans at the 50th anniversary screening last year dressed up for the event. Despite Harnois' love of theater, he doubts he will don a costume. With more than 50 years of history, aliens and traveling companions, coming up with a "Doctor Who" costume isn't easy.

"There's the problem of who you dress up as," Harnois said.

Caption: Peter Capaldi plays the Doctor and Jenna Coleman is cast as Clara in "Dr. Who."

Caption: Jenna Coleman and Peter Capaldi in a scene from the 8th season of "Doctor Who."