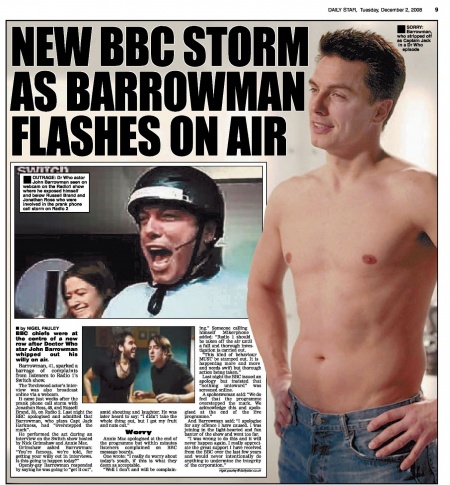 BBC chiefs were at the centre of a new row after Doctor Who star John Barrowman whipped out his willy on air.

Barrowman, 41, sparked a barrage of complaints from listeners to Radio l's Switch show.

The Torchwood actor's interview was also broadcast online via a webcam.

It came just weeks after the prank phone call storm with Jonathan Ross, 48, and Russell

Brand, 33, on Radio 2. Last night the BBC apologised and admitted that Barrowman, who plays Capt Jack Harkness, had "overstepped the mark".

He performed the act during an interview on the Switch show hosted by Nick Grimshaw and Annie Mac. Grimshaw asked Barrowman: "You're famous, we're told, for getting your willy out in interviews. Is this going to happen today?" Openly-gay Barrowman responded by saying he was going to "get it out", amid shouting and laughter. He was later heard to say: "I didn't take the whole thing out, but I got my fruit and nuts out."

Annie Mac apologised at the end of the programme but within minutes listeners complained on BBC message boards.

One wrote: "I really do worry about today's youth, if this is what they deem as acceptable.

"Well I don't and will be complaining." Someone calling himself Mikerphone added: "Radio 1 should be taken off the air until a full and thorough investigation is carried out.

"This kind of behaviour MUST be stamped out. It is happening more and more and needs swift but thorough action being taken."

Last night the BBC issued an apology but insisted that "nothing untoward" was screened online.

A spokeswoman said: "We do feel that the programme overstepped the mark. We acknowledge this and apologised at the end of the live programme."

And Barrowman said: "I apologise for any offence I have caused. I was joining in the light-hearted and fun banter of the show and went too far. "I was wrong to do this and it will never happen again. I really appreciate the great support I have received from the BBC over the last few years and would never intentionally do anything to undermine the integrity of the corporation."

Caption: OUTRAGE: Dr Who actor John Barrowman seen on webcam on the Radio 1 show where he exposed himself and below Russell Brand and Jonathan Ross who were involved in the prank phone call storm on Radio 2

Caption: SORRY: Barrowman, who stripped off as Captain Jack in a Dr Who