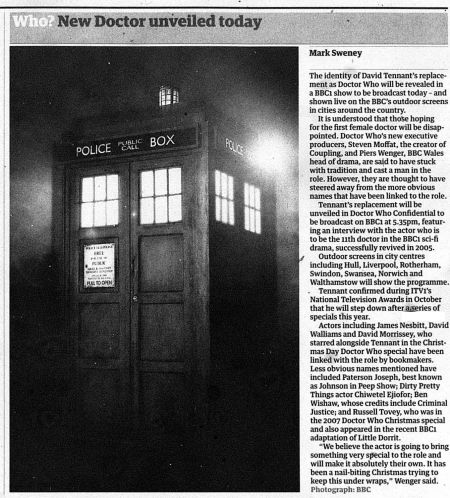 The identity of David Tennant's replacement as Doctor Who will be revealed in a BBC1 show to be broadcast today - and shown live on the BBC's outdoor screens in cities around the country.

It is understood that those hoping for the first female doctor will be disappointed. Doctor Who's new executive producers, Steven Moffat, the creator of Coupling, and Piers Wenger, BBC Wales head of drama, are said to have stuck with tradition and cast a man in the role. However, they are thought to have steered away from the more obvious names that have been linked to the role.

Tennant's replacement will be unveiled in Doctor Who Confidential to be broadcast on BBC1 at 5.35pm, featuring an interview with the actor who is to be the 11th doctor in the BBC1 sci-fi drama, successfully revived in 2005.

Tennant confirmed during ITV1's National Television Awards in October that he will step down after a series of specials this year.

Actors including James Nesbitt, David Walliams and David Morrissey, who starred alongside Tennant in the Christmas Day Doctor Who special have been linked with the role by bookmakers. Less obvious names mentioned have included Paterson Joseph, best known as Johnson in Peep Show; Dirty Pretty Things actor Chiwetel Ejiofor; Ben Wishaw, whose credits include Criminal Justice; and Russell Tovey, who was in the 2007 Doctor Who Christmas special and also appeared in the recent BBC1 adaptation of Little Dorrit.

"We believe the actor is going to bring something very special to the role and will make it absolutely their own. It has been a nail-biting Christmas trying to keep this under wraps," Wenger said.