New Dr Who all geared up 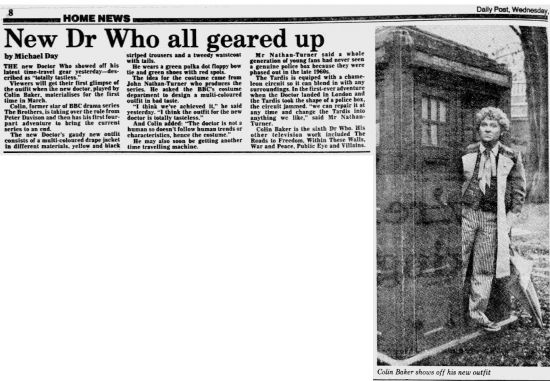 THE new Doctor Who showed off his latest time-travel gear yesterday—described as "totally tastless."

Viewers will get their first glimpse of the outfit when the new doctor, played by Colin Baker, materialises for the first time in March.

Colin, former star of BBC drama series The Brothers, is taking over the role from Peter Davison and then has his first four-part adventure to bring the current series to an end.

The new Doctor's gaudy new outfit consists of a multi-coloured drape jacket in different materials. yellow and black striped trousers and a tweedy waistcoat with tails.

The idea for the costume came from John Nathan-Turner who produces the series. He asked the BBC's costume department to design a multi-coloured outfit in bad taste.

"I think we've achieved it," he said yesterday. "I think the outfit for the new doctor is totally tasteless."

And Colin added: "The doctor is not a human so doesn't follow human trends or characteristics, hence the costume."

He may also soon be getting another time travelling machine.

Mr Nathan-Turner said a whole generation of young fans had never seen a genuine police box because they were phased out in the late 1960s.

The Tardis is equiped with a chameleon circuit so it can blend in with any surroundings. In the first-ever adventure when the Doctor landed in London and the Tardis took the shape of a police box, the circuit jammed. "we can repair it at any time and change the Tardis into anything we like," said Mr Nathan-Turner.

Colin Baker is the sixth Dr Who. His other television work included The Roads to Freedom, Within These Walls, War and Peace, Public Eye and Villains.