New crisis for the Doctor 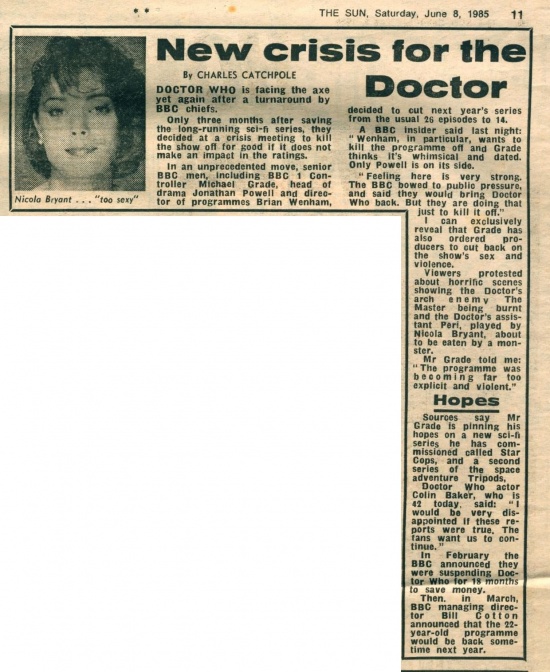 DOCTOR WHO is facing the axe yet again after a turnaround by BBC chiefs.

Only three months after saving the long-running sci-fi series, they decided at a crisis meeting to kill the show off for good if it does not make an impact in the ratings.

In an unprecedented move, senior BBC men, including BBC 1 Controller Michael Grade, head of drama Jonathan Powell and director of programmes Brian Wenham, decided to cut next year's series from the usual 26 episodes to 14.

A BBC insider said last night: "Wenham, in particular, wants to kill the programme off and Grade thinks it's whimsical and dated. Only Powell is on its side.

"Feeling here is very strong. The BBC bowed to public pressure, and said they would bring Doctor Who back. But they are doing that just to kill it off."

I can exclusively reveal that Grade has also ordered producers to cut back on the show's sex and violence.

Viewers protested about horrific scenes showing the Doctor's arch enemy The Master being burnt and the Doctor's assistant Peri, played by Nicola Bryant, about to be eaten by a monster.

Mr Grade told me: "The programme was becoming far too explicit and violent."

Sources say Mr Grade is pinning his hopes on a new sci-fi series he has commissioned called Star Cops, and a second series of the space adventure Tripods,

Doctor Who actor Colin Baker, who is 42 today, said: "would be very disappointed if these reports were true. The fans want us to continue."

In February the BBC announced they were suspending Doctor Who for 18 months to save money.

Then, in March, BBC managing director Bill Cotton announced that the 22-year-old programme would be back sometime next year.