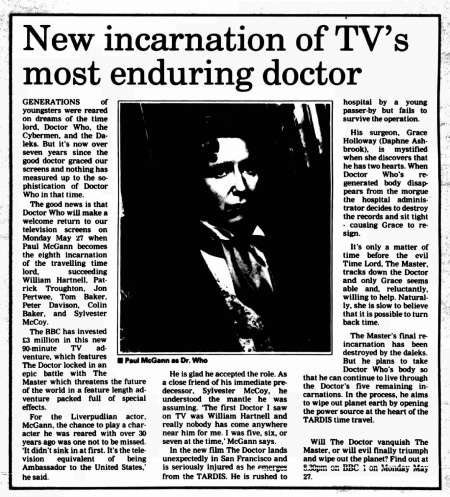 GENERATIONS of youngsters were reared on dreams of the time lord, Doctor Who, the Cybermen, and the Da-leks. But it's now over seven years since the good doctor graced our screens and nothing has measured up to the sophistication of Doctor Who in that time.

The good news is that Doctor Who will make a welcome return to our television screens on Monday May 27 when Paul McGann becomes the eighth Incarnation of the travelling time lord, succeeding William Hartnell, Patrick Troughton, Jon Pertwee, Tom Baker, Peter Davison, Colin Baker, and Sylvester McCoy.

The BBC has invested £3 million in this new 90-minute TV adventure, which features The Doctor locked in an epic battle with The Master which threatens the future of the world in a feature length adventure packed full of special effects.

For the Liverpudlian actor, McGann, the chance to play a character he was reared with over 30 years ago was one not to be missed. 'It didn't sink in at first. It's the television equivalent of being Ambassador to the United States,' he said.

He is glad he accepted the role. As a close friend of his immediate predecessor, Sylvester McCoy, he understood the mantle he was assuming. 'The first Doctor I saw on TV was William Hartnell and really nobody has come anywhere near him for me. I was five, six, or seven at the time,' McGann says.

In the new film The Doctor lands unexpectedly in San Francisco and is seriously injured as he emerges from the TARDIS. He is rushed to hospital by a young passer-by but fails to survive the operation.

His surgeon, Grace Holloway (Daphne Ashbrook), is mystified when she discovers that he has two hearts. When Doctor Who's regenerated body disappears from the morgue the hospital administrator decides to destroy the records and sit tight causing Grace to resign.

It's only a matter of time before the evil Time Lord, The Master, tracks down the Doctor and only Grace seems able and, reluctantly, willing to help. Naturally, she is slow to believe that it is possible to turn back time.

The Master's final reincarnation has been destroyed by the daleks. But he plans to take Doctor Who's body so that he can continue to live through the Doctor's five remaining incarnations, In the process, he aims to wipe out planet earth by opening the power source at the heart of the TARDIS time travel.

Will The Doctor vanquish The Master, or will evil finally triumph and wipe out the planet? Find out at 8.30pm on BBC1 on Monday May 27.