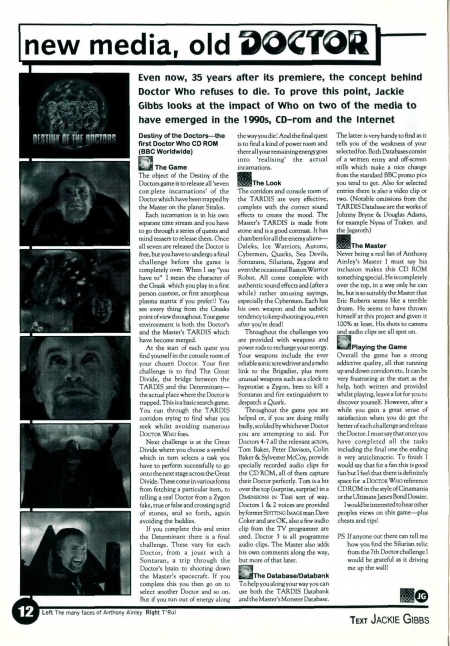 Even now, 35 years after Its premiere, the concept behind Doctor Who refuses to die. To prove this point, Jackie Gibbs looks at the impact of Who on two of the media to have emerged in the 1990s, CD-rom and the Internet

The object of the Destiny of the Doctors game is to release all 'seven complete incarnations' of the Doctor which have been trapped by the Master on the planet Siralos.

Each incarnation is in his own separate time stream and you have to go through a series of quests and mind teasers to release them. Once all seven are released the Doctor is free, but you have to undergo a final challenge before the game is completely over. When I say "you have to" I mean the character of the Graak which you play in a first person context, or first amorphous plasma matrix if you prefer!! You see every thing from the Graaks point of view throughout. Your game environment is both the Doctor's and the Master's TARDIS which have become merged.

At the start of each quest you find yourself in the console room of your chosen Doctor. Your first challenge is to find The Great Divide, the bridge between the TARDIS and the Determinant—the actual place where the Doctor is trapped. This is a basic search game. You run through the TARDIS corridors trying to find what you seek whilst avoiding numerous DOCTOR WHO foes.

Next challenge is at the Great Divide where you choose a symbol which in turn selects a task you have to perform successfully to go onto the next stage across the Great Divide. These come in various forms from fetching a particular item, to telling a real Doctor from a Zygon fake, true or false and crossing a grid of stones, and so forth, again avoiding the baddies.

If you complete this and enter the Determinant there is a final challenge. These vary for each Doctor, from a joust with a Sontaran, a trip through the Doctor's brain to shooting down the Master's spacecraft. If you complete this you then go on to select another Doctor and so on. But if you run out of energy along the way you die! And the final quest is to find a kind of power room and there all your remaining energy goes into 'realising' the actual incarnations.

The corridors and console room of the TARDIS are very effective, complete with the correct sound effects to create the mood. The Master's TARDIS is made from stone and is a good contrast. It has chambers for all the enemy aliens—Daleks, Ice Warriors, Autons, Cybermen, Quarks, Sea Devils, Sontarans, Silurians, Zygons and even the occasional Raston Warrior Robot. All come complete with authentic sound effects and (after a while) rather amusing sayings, especially the Cybermen. Each has his own weapon and the sadistic tendency to keep shooting you, even after you're dead!

Throughout the challenges you are provided with weapons and power rods to recharge your energy. Your weapons include the ever reliable sonic screwdriver and a radio link to the Brigadier, plus more unusual weapons such as a clock to hypnotise a Zygon, bees to kill a Sontaran and fire extinguishers to despatch a Quark.

Throughout the game you are helped or, if you are doing really badly, scolded by whichever Doctor you are attempting to aid. For Doctors 4.7 all the relevant actors, Tom Baker, Peter Davison, Colin Baker & Sylvester McCoy, provide specially recorded audio clips for the CD ROM, all of them capture their Doctor perfectly. Tom is a bit over the top (surprise, surprise) in a DIMENSIONS IN TIME sort of way. Doctors 1 & 2 voices are provided by former SPITTING IMAGE man Dave Coker and are OK, also a few audio clip from the TV programme are used. Doctor 3 is all programme audio clips. The Master also adds his own comments along the way, but more of that later.

To help you along your way you can use both the TARDIS Databank and the Master's Monster Database.

The latter is very handy to find as it tells you of the weakness of your selected foe. Both Databases consist of a written entry and off-screen stills which make a nice change from the standard BBC promo pies you tend to get. Also for selected entries there is also a video clip or two. (Notable omissions from the TARDIS Database are the works of Johnny Bryne & Douglas Adams, for example Nyssa of Traken and the Jagaroth)

Never being a real fan of Anthony Ainley's Master I must say his inclusion makes this CD ROM something special. He is completely over the top, in a way only he can be, but is so suitably the Master that Eric Roberts seems like a terrible dream. He seems to have thrown himself at this project and given it 100% at least. His shots to camera and audio clips are all spot on.

Overall the game has a strong addictive quality, all that running up and down corridors etc. It can be very frustrating at the start as the help, both written and provided whilst playing, leave a lot for you to discover yourself. However, after a while you gain a great sense of satisfaction when you do get the better of each challenge and release the Doctor. I must say that once you have completed all the tasks including the final one the ending is very anticlimactic. To finish I would say that fora fan this is good fun but I feel that there is definitely space for a DOCTOR WHO reference CDROM in the style of Cinarnania or the Ultimate James Bond Dossier.

I would be interested to hear other peoples views on this game—plus cheats and tips!

PS If anyone out there can tell me how you find the Silurian relic from the 7th Doctor challenge I would be grateful as it driving me up the wall!