New office puts police in past 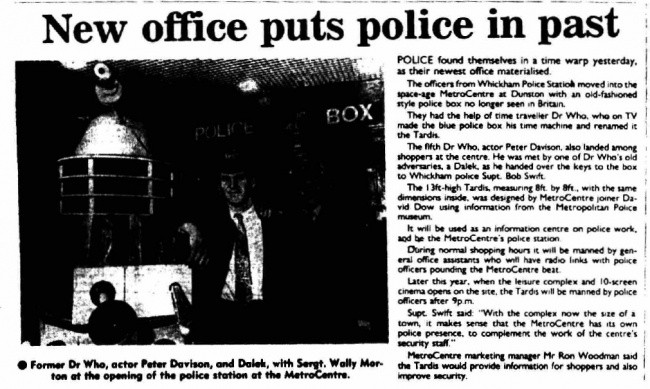 POLICE found themselves in a time warp yesterday as their newest office materialised.

The officers from Whickharn Police Station moved into the space-age MetroCentre at Dunstan with an old-fashioned style police box no longer seen in Britain.

They had the help of time traveller Dr Who, who on TV made the blue police box his time machine and renamed it the Tardis.

The fifth Dr Who, actor Peter Davison, also landed among shoppers at the centre. He was met by one of Dr Who's old adversaries, a Dalek, as he handed over the keys to the box to Whickham police Supt. Bob Swift.

The 13ft-high Tardls, measuring 8ft. by 8ft., with the same dimensions inside, was designed by MetroCentre joiner David Dow, using information from the Metropolitan Police museum.

It will be used as an information centre on police work, and be the MetroCentre's police station.

During normal shopping hours it will be manned by general office assistants who will have radio links with police officers pounding the MetroCentre beat.

Later this year, when the leisure complex and 10-screen cinema opens on the site, the Tardis will be manned by police officers after 9p.m.

Supt Swift said: "With the complex now the size of a town, it makes sense that the MetroCentre has its own police presence, to complement the work of the centre's security staff."

Caption: Former Dr Who, actor Peter Davison and Dalek, with Sergt. Wally Merton at the opening of the plice station at the MetroCentre.