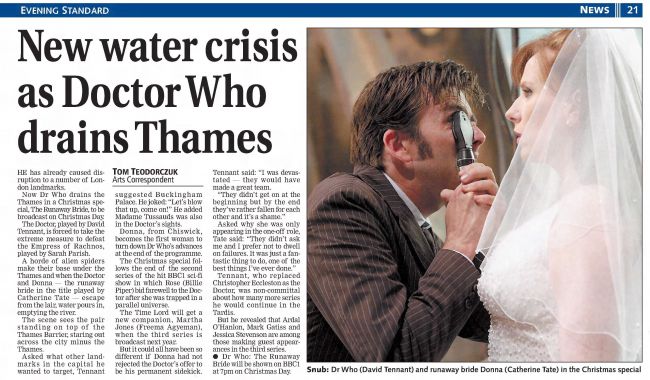 HE has already caused disruption to a number of London landmarks.

Now Dr Who drains the Thames in a Christmas special, The Runaway Bride, to be broadcast on Christmas Day.

The Doctor, played by David Tennant, is forced to take the extreme measure to defeat the Empress of Rachnos, played by Sarah Parish.

A horde of alien spiders make their base under the Thames and when the Doctor and Donna — the runaway bride in the title played by Catherine Tate — escape from the lair, water pours in, emptying the river.

The scene sees the pair standing on top of the Thames Barrier, staring out across the city minus the Thames.

Asked what other landmarks in the capital he wanted to target, Tennant suggested Buckingham Palace. He joked: "Let's blow that up, come on!" He added Madame Tussauds was also in the Doctor's sights.

Donna, from Chiswick, becomes the first woman to turn down Dr Who's advances at the end of the programme.

The Christmas special follows the end of the second series of the hit BBC1 sci-fi show in which Rose (Billie Piper) bid farewell to the Doctor after she was trapped in a parallel universe.

The Time Lord will get a new companion, Martha Jones (Freema Agyeman), when the third series is broadcast next year.

But it could all have been so different if Donna had not rejected the Doctor's offer to be his permanent sidekick. Tennant said: "I was devastated — they would have made a great team.

"They didn't get on at the beginning but by the end they've rather fallen for each other and it's a shame."

Asked why she was only appearing in the one-off role, Tate said: "They didn't ask me and I prefer not to dwell on failures. It was just a fantastic thing to do, one of the best things I've ever done."

Tennant, who replaced Christopher Eccleston as the Doctor, was non-committal about how many more series he would continue in the Tardis.

But he revealed that Ardal O'Hanlon, Mark Gatiss and Jessica Stevenson are among those making guest appearances in the third series.

Dr Who: The Runaway Bride will be shown on BBC1 at 7pm on Christmas Day.