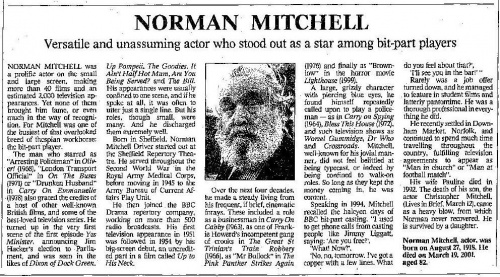 NORMAN MITCHELL was a prolific actor on the small and large screen, making more than 40 films and an estimated 2,000 television appearances. Yet none of them brought him fame, or even much in the way of recognition. For Mitchell was one of the busiest of that overlooked breed of thespian workhorse: the bit-part player.

The man who starred as "Arresting Policeman" in Oliver! (1968), "London Transport Official" in On The Buses (1971) or "Drunken Husband" in Carry On Emmanuelle (1978) also graced the credits of a host of other well-known British films, and some of the best-loved television series. He turned up in the very first scene of the first episode Yes Minister, announcing Jim Hacker's election to Parliament, and was seen in the likes of Dixon of Dock Green, Up Pompeii, The Goodies, It Ain't Half Hot Mum, Are You Being Served? and The Bill. His appearances were usually confined to one scene, and if he spoke at all, it was often to utter just a single line. But his roles, though small, were many. And he dis-charged them extremely well.

Born in Sheffield, Norman Mitchell Driver started out at the Sheffield Repertory Theatre. He served throughout the Second World War in the Royal Army Medical Corps, before moving in 1945 to the Army Bureau of Current Affairs Play Unit.

He then joined the BBC Drama repertory company, working on more than 500 radio broadcasts. His first television appearance in 1951 was followed in 1954 by his big-screen debut, an uncredited part in a film called Up to His Neck.

Over the next four decades, he made a steady living from his frequent, if brief, cinematic forays. These included a role as a businessman in Carry On Cabby (1963), as one of Frankie Howerd's incompetent gang of crooks in The Great St Trinian's Train Robbery (1966), as "Mr Bullock" in The Pink Panther Strikes Again (1976) and finally as "Brownlow" in the horror movie Lighthouse (1999).

A large, grizzly character with piercing blue eyes, he found himself repeatedly called upon to play a policeman - as in Carry on Spying (1964), Bless This House (1972), and such television shows as Worzel Gummidge, Dr Who and Crossroads. Mitchell, well-known for his jovial manner, did not feel belittled at being typecast, or indeed by being con-fined to walk-on roles. So long as they kept the money coming in, he was content.

Speaking in 1994, Mitchell recalled the halcyon days of BBC bit-part casting. "I used to get phone calls from casting people like Jimmy Liggatt, saying: 'Are you free?',

'No, no, tomorrow. I've got a copper with a few lines. What do you feel about that?',

Rarely was a job offer turned down, and he managed to feature in student films and latterly pantomime. He was a thorough professional in everything he did.

He recently settled in Downham Market, Norfolk, and continued to spend much time travelling throughout the country, fulfilling television agreements to appear as "Man in church" or "Man at football match".

His wife Pauline died in 1992. The death of his son, the actor Christopher Mitchell, (Lives in Brief, March 12), came as a heavy blow, from which Norman never recovered. He is survived by a daughter.