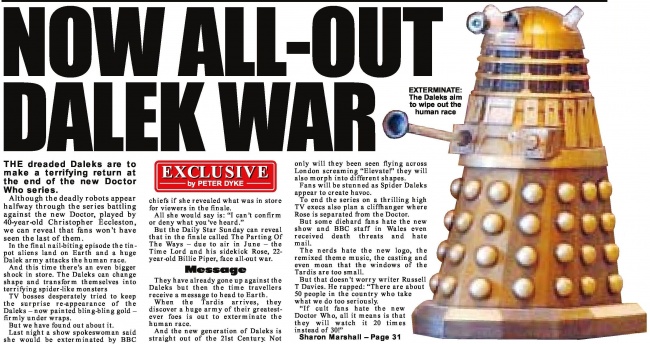 THE dreaded Daleks are to make a terrifying return at the end of the new Doctor Who series.

Although the deadly robots appear halfway through the series battling against the new Doctor, played by 40-year-old Christopher Eccleston, we can reveal that fans won't have seen the last of them.

In the final nail-biting episode the tin-pot aliens land on Earth and a huge Dalek army attacks the human race. And this time there's an even bigger shock in store. The Daleks can change shape and transform themselves into terrifying spider-like monsters

But we have found out about it.

Last night a show spokeswoman said she would be exterminated by BBC chiefs if she revealed what was in store for viewers in the finale.

All she would say is: "I can't confirm or deny what you've heard."

But the Daily Star Sunday can reveal that in the finale called The Parting Of The Ways — due to air in June — the Time Lord and his sidekick Rose, 22-year-old Billie Piper, face all-out war.

They have already gone up against the Daleks but then the time travellers receive a message to head to Earth. When the Tardis arrives, they discover a huge army of their greatest-ever foes is out to exterminate the human race.

And the new generation of Daleks is straight out of the 21st Century. Not only will they been seen flying across London screaming "Elevate!" they will also morph into different shapes. Fans will be stunned as Spider Daleks appear to create havoc.

To end the series on a thrilling high TV execs also plan a cliffhanger where Rose is separated from the Doctor. But some diehard fans hate the new show and BBC staff in Wales even received death threats and hate mail.

The nerds hate the new logo, the remixed theme music, the casting and even moan that the windows of the Tardis are too small.

But that doesn't worry writer Russell T Davies. He rapped: "There are about 50 people in the country who take what we do too seriously.

"If cult fans hate the new Doctor Who, all it means is that they will watch it 20 times instead of 30!"

Caption: EXTERMINATE: The Daleks aim to wipe out the human race