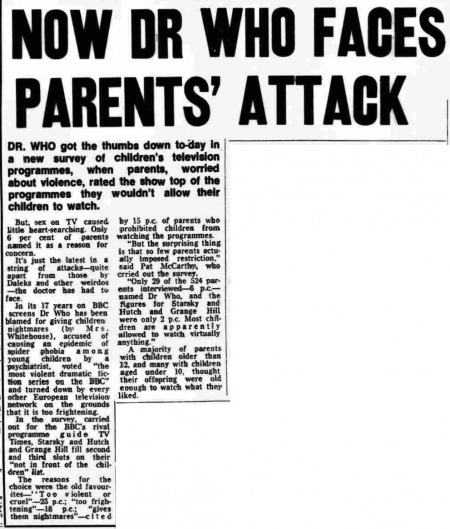 DR. WHO got the thumbs down to-day in a new survey of children's television programmes, when parents, worried about violence, rated the show top of the programmes they wouldn't allow Ihnir children to watch.

But, sex on TV caused little heart-searching, Only 6 per cent of parents named it as reason for concern.

Its just the latest in a string of attacks— quite apart from those by Daleks, and other weirdos — the doctor has had to face.

In its 17 years on BBC screens Dr Who has been blamed for giving children nightmares (by Mrs. Whitehouse), accused of causing an epidemic of spider phobia among young children by a psychiatrist, voted "the most violent dramatic fiction series on the BBC" and turned down by every other European television network on the grounds that it is too frightening.

In the survey, carried out for the BBC's rival programme guide TV Times, Starsky and Hutch and Grange Hill fill second and third slots on their "not in front of the children" list.

The reasons for the choice were the old favourites -- "Too violent or cruel" -- 23 p.c.; "too frightening" -- 18 p.c.; "gives them nightmares"-—cited by 15 p.c. of parents whe prohibited children from watching the programmes.

"But the surprising thing is that so few parents actually imposed restriction," said Pat McCarthy, who caried out the survey.

"Only 29 of the 524 parents interviewed--6 p.c.--named Dr Who, and the figures for Starskey and Hutch and Grange Hill were only 2 p.c. Most chidren are apparently allowed to watch virtually anything."

A majority of parents with children older than 12 and many with children aged under 10, thought their offspring were old enough to watch what they liked.