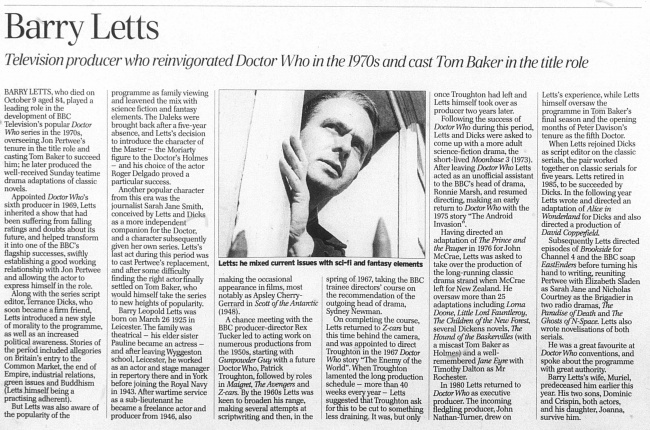 BARRY LETTS, who died on October 9 aged 84, played a leading role in the development of BBC Television's popular Doctor Who series in the 1970s, overseeing Jon Pertwee's tenure in the title role and casting Tom Baker to succeed him; he later produced the well-received Sunday teatime drama adaptations of classic novels.

Appointed Doctor Who's sixth producer in 1969, Letts inherited a show that had been suffering from falling ratings and doubts about its future, and helped transform it into one of the BBC's flagship successes, swiftly establishing a good working relationship with Jon Pertwee and allowing the actor to express himself in the role.

Along with the series script editor, Terrance Dicks, who soon became a firm friend, Letts introduced a new style of morality to the programme, as well as an increased political awareness. Stories of the period included allegories on Britain's entry to the Common Market, the end of Empire, industrial relations, green issues and Buddhism (Letts himself being a practising adherent).

But Letts was also aware of the popularity of the programme as family viewing and leavened the mix with science fiction and fantasy elements. The Daleks were brought back after a five-year absence, and Letts's decision to introduce the character of the Master - the Moriarty figure to the Doctor's Holmes - and his choice of the actor Roger Delgado proved a particular success.

Another popular character from this era was the journalist Sarah Jane Smith, conceived by Letts and Dicks as a more independent companion for the Doctor, and a character subsequently given her own series. Letts's last act during this period was to cast Pertwee's replacement, and after some difficulty finding the right actor finally settled on Tom Baker, who would himself take the series to new heights of popularity.

Barry Leopold Letts was born on March 26 1925 in Leicester. The family was theatrical - his elder sister Pauline became an actress - and after leaving Wyggeston school, Leicester, he worked as an actor and stage manager in repertory there and in York before joining the Royal Navy in 1943. After wartime service as a sub-lieutenant he became a freelance actor and producer from 1946, also making the occasional appearance in films, most notably as Apsley Cherry-Gerrard in Scott of the Antarctic (1948).

A chance meeting with the BBC producer-director Rex Tucker led to acting work on numerous productions from the 1950s, starting with Gunpowder Guy with a future Doctor Who, Patrick Troughton, followed by roles in Maigret, The Avengers and Z-cars. By the 1960s Letts was keen to broaden his range, making several attempts at scriptwriting and then, in the spring of 1967, taking the BBC trainee directors' course on the recommendation of the outgoing head of drama, Sydney Newman.

On completing the course, Letts returned to Z-cars but this time behind the camera, and was appointed to direct Troughton in the 1967 Doctor Who story "The Enemy of the World". When Troughton lamented the long production schedule - more than 40 weeks every year - Letts suggested that Troughton ask for this to be cut to something less draining. It was, but only once Troughton had left and Letts himself took over as producer two years later.

Following the success of Doctor Who during this period, Letts and Dicks were asked to come up with a more adult science-fiction drama, the short-lived Moonbase 3 (1973). After leaving Doctor Who Letts acted as an unofficial assistant to the BBC's head of drama, Ronnie Marsh, and resumed directing, making an early return to Doctor Who with the 1975 story "The Android Invasion".

Having directed an adaptation of The Prince and the Pauper in 1976 for John McCrae, Letts was asked to take over the production of the long-running classic drama strand when McCrae left for New Zealand. He oversaw more than 25 adaptations including Lorna Doone, Little Lord Fauntleroy, The Children of the New Forest, several Dickens novels, The Hound of the Baskervilles (with a miscast Tom Baker as Holmes) and a well-remembered Jane Eyre with Timothy Dalton as Mr Rochester.

In 1980 Letts returned to Doctor Who as executive producer. The incoming fledgling producer, John Nathan-Turner, drew on Letts's experience, while Letts himself oversaw the programme in Tom Baker's final season and the opening months of Peter Davison's tenure as the fifth Doctor.

When Letts rejoined Dicks as script editor on the classic serials, the pair worked together on classic serials for five years. Letts retired in 1985, to be succeeded by Dicks. In the following year Letts wrote and directed an adaptation of Alice in Wonderland for Dicks and also directed a production of David Copperfield.

Subsequently Letts directed episodes of Brookside for Channel 4 and the BBC soap EastEnders before turning his hand to writing, reuniting Pertwee with Elizabeth Sladen as Sarah Jane and Nicholas Courtney as the Brigadier in two radio dramas, The Paradise of Death and The Ghosts of N-Space. Letts also wrote novelisations of both serials.

He was a great favourite at Doctor Who conventions, and spoke about the programme with great authority.

Barry Letts's wife, Muriel, predeceased him earlier this year. His two sons, Dominic and Crispin, both actors, and his daughter, Joanna, survive him.