On the lighter side, the world is ending 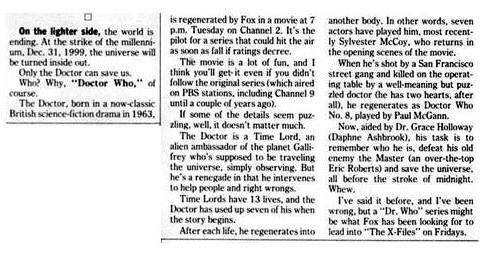 On the lighter side, the world is ending. At the strike of the millennium, Dec. 31, 1999, the universe will be turned inside out.

Only the Doctor can save us.

The Doctor, born in a now-classic British science-fiction drama in 1963, is regenerated by Fox in a movie at 7 p.m. Tuesday on Channel 2. It's the pilot for a series that could hit the air as soon as fall if ratings decree.

The movie is a lot of fun, and I think you'll get it even if you didn't follow the original series (which aired on PBS stations, including Channel 9 until a couple of years ago).

If some of the details seem puzzling, well, it doesn't matter much.

The Doctor is a Time Lord, an alien ambassador of the planet Gallifrey who's supposed to be traveling the universe, simply observing. But he's a renegade in that he intervenes to help people and right wrongs.

Time Lords have 13 lives, and the Doctor has used up seven of his when the story begins.

After each life, he regenerates into another body. In other words, seven actors have played him, most recently Sylvester McCoy, who returns in the opening scenes of the movie.

When he's shot by a San Francisco street gang and killed on the operating table by a well-meaning but puzzled doctor (he has two hearts, after all), he regenerates as Doctor Who No. 8, played by Paul McGann.

Now, aided by Dr. Grace Holloway (Daphne Ashbrook), his task is to remember who he is, defeat his old enemy the Master (an over-the-top Eric Roberts) and save the universe, all before the stroke of midnight. Whew.

I've said it before, and I've been wrong, but a "Dr. Who" series might be what Fox has been looking for to lead into "The X-Files" on Fridays.