Once bitten, Bill's not shy 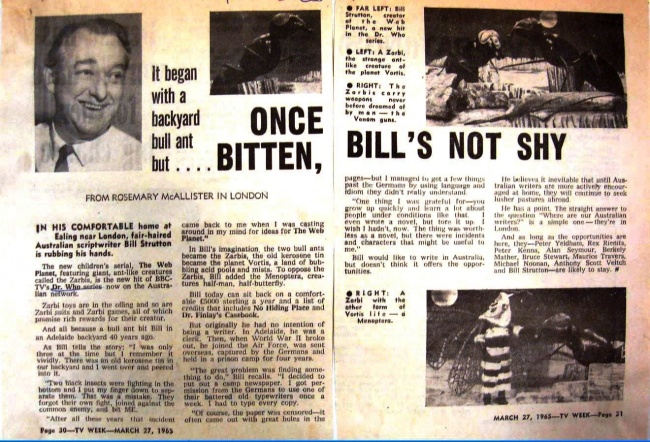 It began with a backyard bull ant but ....

The new children's serial, The Web Planet, featuring giant, ant-like creatures called the Zarbis, is the new hit of BBC TV's Dr. Who series now on the Australian network.

Zarbi toys are in the offing and so are Zarbi suits and Zarbi games, all of which promise rich rewards for their creator.

And all because a bull ant bit Bill in an Adelaide backyard 40 years ago.

As Bill tells the story: "I was only three of the time but I remember it vividly. There was an old kerosene tin in our backyard and I went over and peered into it.

"Two black insects were fighting in the bottom and I put my finger down to separate them. That was a mistake. They forgot their own fight, joined against the common enemy, and bit me.

"After all these years that incident came back to me when I was casting around in my mind for ideas for The Web Planet."

In Bill's imagination, the two bull ants became the Zarbis, the old kerosene two and became the planet Vortis, a land of bubbling acid pools and mists. To oppose those Zarbis, Bill added the Menoptera, creatures half-man, half-butterfly.

Bill today can sit back on a comfortable £5000 sterling a year and a list of credits that includes No Hiding Place and Dr. Finley's Casebook.

But originally he had no intention of being a writer. In Adelaide, he was a clerk. Then World War II broke out, he joined the Air Force, was sent overseas, captured by the Germans and held a prison camp for four years.

"The greatest problem was finding something to do," Bill recalls. "I decided to put out a camp newspaper. I got permission from the Germans to use one of their battered old typewriters once a week. I had to type every copy.

"Of course, the paper was censored and often came out with great holes in the pages but I managed to get a few things pass the Germans by using language and hit him they didn't really understand.

"One thing I was grateful for you grow quickly on learn a lot about people under conditions like that. I even wrote a novel, but tore it up. I wish I hadn't now. The thing was worthless as a novel, but there were incidents and characters that might be useful to me."

Bill would like to write in Australia, but doesn't think it offers the opportunities.

He believes it inevitable that until Australian writers are more actively encouraged at home, they will continue to seek lusher pastures abroad.

He has a point. The straight answer to the question "Where are our Australian writers?" is a simple one-- they're in London.

Far left: Bill Strutton, creator of The Web Planet, a new hit in the Dr. Who series.

Left: a Zarbi, the strange and like creature of the planet Vortis.

Right: The Zarbi carry weapons never before dreamed of by man-- venom guns.

Right: A Zarbi with the other form of Vortis Life-- a Menoptera.