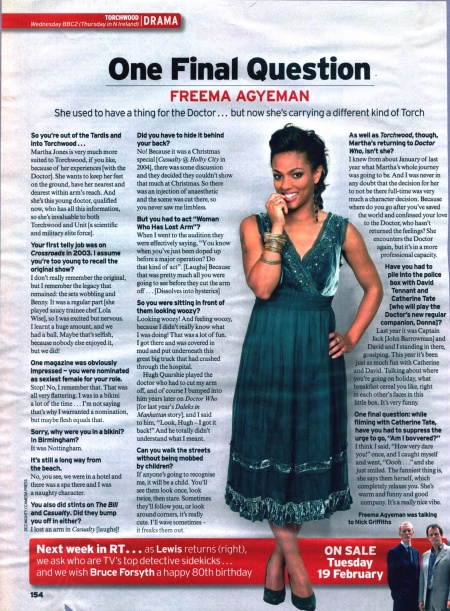 She used to have a thing for the Doctor ... but now she's carrying a different kind of Torch

So you're out of the Tardis and into Torchwood

Martha Jones is very much more suited to Torchwood, if you like, because of her experiences [with the Doctor]. She wants to keep her feet on the ground, have her nearest and dearest within arm's reach. And she's this young doctor, qualified now, who has all this information, so she's invaluable to both Torchwood and Unit [a scientific and military elite force].

Your first telly job was on Crossroads in 2003. I assume you're too young to recall the original show?

I don't really remember the original, but I remember the legacy that remained: the sets wobbling and Benny. It was a regular part [she played saucy trainee chef Lola Wise], so I was excited but nervous. I learnt a huge amount, and we had a ball. Maybe that's selfish, because nobody else enjoyed it, but we did!

One magazine was obviously impressed — you were nominated as sexiest female for your role. Stop! No, I remember that. That was all very flattering. I was in a bikini a lot of the time ... I'm not saying that's why I warranted a nomination, but maybe flesh equals that.

Sorry, why were you in a bikini? In Birmingham?

It's still a long way from the beach. No, you see, we were in a hotel and there was a spa there and I was

You also did stints on The Bill and Casualty. Did they bump you off in either?

I lost an arm in Casualty [laughs]!

Did you have to hide it behind your back?

No! Because it was a Christmas special [Casualty @ Holby City in 2004], there was some discussion and they decided they couldn't show that much at Christmas. So there was an injection of anaesthetic and the scene was cut there, so you never saw me limbless.

But you had to act "Woman Who Has Lost Arm"?

When I went to the audition they were effectively saying, "You know when you've just been doped up before a major operation? Do that kind of act". [Laughs] Because that was pretty much all you were going to see before they cut the arm off ... [Dissolves into hysterics]

So you were sitting in front of them looking woozy?

Looking woozy! And feeling woozy, because I didn't really know what I was doing! That was a lot of fun. I got there and was covered in mud and put underneath this great big truck that had crashed through the hospital.

Hugh Quarshie played the doctor who had to cut my arm off, and of course I bumped into him years later on Doctor Who [for last year's Daleks in Manhattan story], and I said to him, "Look, Hugh — I got it back!" And he totally didn't understand what I meant.

Can you walk the streets without being mobbed by children?

If anyone's going to recognise me, it will be a child. You'll see them look once, look twice, then stare. Sometimes they'll follow you, or look around corners, it's really cute. I'll wave sometimes —it freaks them out.

As well as Torchwood, though, Martha's returning to Doctor

Who, isn't she? :r..,,. I knew from about January of last year what Martha's whole journey was going to be. And I was never in any doubt that the decision for her to not be there full-time was very much a character decision. Because where do you go after you've saved the world and confessed your love to the Doctor, who hasn't returned the feelings? She encounters the Doctor again, but it's in a more professional capacity.

Have you had to pile into the police box with David Tennant and Catherine Tate [who will play the Doctor's new regular companion, Donna]? Last year it was Captain Jack [John Barrowman] and David and I standing in there, gossiping. This year it's been just as much fun with Catherine and David. Talking about where you're going on holiday, what breakfast cereal you like, right in each other's faces in this little box. It's very funny.

One final question: while filming with Catherine Tate, have you had to suppress the urge to go, "Am I bovvered?"

I think I said, "How very dare you!" once, and I caught myself and went, "Oooh ..." and she just smiled. The funniest thing is, she says them herself, which completely relaxes you. She's warm and funny and good company. It's a really nice vibe.