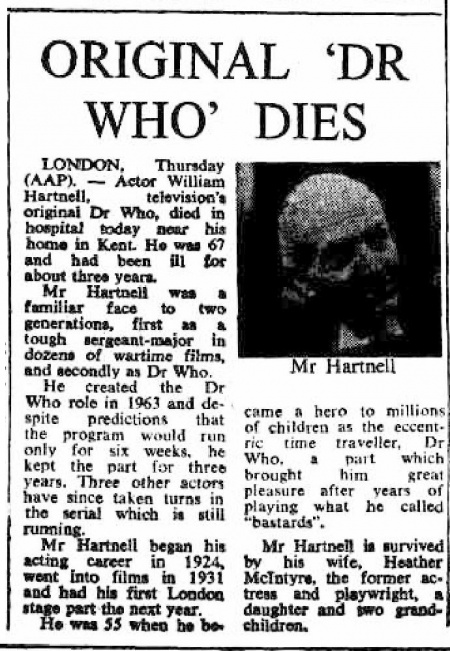 LONDON, Thursday (AAP). - Actor William Hartnell, television's original Dr Who, died in hospital today near his home in Kent. He was 67 and had been ill for about three years.

Mr Hartnell was a familiar face to two generations, first as a tough sergeant-major in dozens of wartime films, and secondly as Dr Who.

He created the Dr Who role in 1963 and despite predictions that the program would run only for six weeks, he kept the part for three years. Three other actors have since taken turns in the serial which is still running.

Mr Hartnell began his acting career in 1924, went into films in 1931 and had his first London stage part the next year.

He was 55 when he became a hero to millions of children as the eccentric time traveller, Dr Who, a part which brought him great pleasure after years of playing what he called "bastards".

Mr Hartnell is survived by his wife, Heather McIntyre, the former actress and playwright, a daughter and two grandchildren.