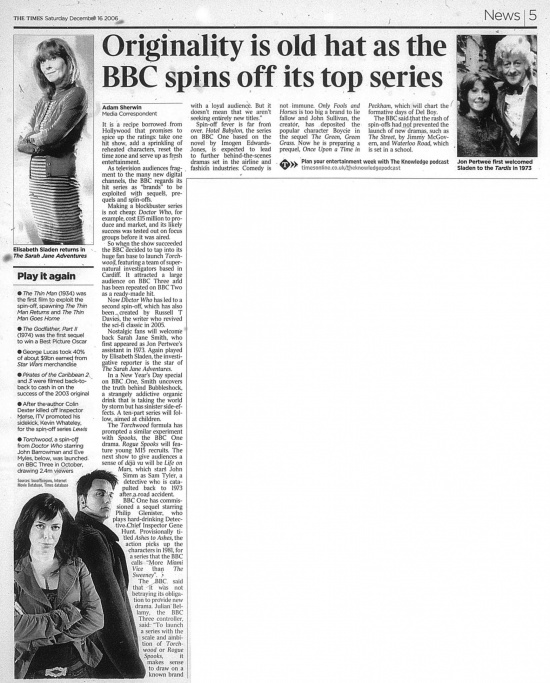 It is a recipe borrowed from Hollywood that promises to spice up the ratings: takeone hit show, add a sprinkling of reheated characters, reset the time zone and serve up as fresh entertainment.

As television audiences fragment to the many new digital channels, the BBC regards its hit series as "brands" to be exploited with sequels, prequels and spin offs.

Making a blockbuster series is not cheap: Doctor Who, for example, cost £15 million to produce and market, and its likely success was tested out on focus groups before it was aired.

So when the show succeeded the BBC decided to tap into its huge fan base to launch Torchwood, featuring a team of supernatural investigators based in Cardiff. It attracted a large audience on BBC Three and has been repeated on BBC Two as a ready-made hit.

Now Doctor Who has led to a second spin-off, which has also been created by Russell T Davies, the writer who revived the sci-fi classic in 2005.

Nostalgic fans will welcome back Sarah Jane Smith, who first appeared as Jon Pertwee's assistant in 1973. Again played by Elisabeth Sladen, the investigative reporter is the star of The Sarah Jane Adventures.

In a New Year's Day special on BBC One, Smith uncovers the truth behind Bubbleshock, a strangely addictive organic drink that is taking the world by storm but has sinister side-effects. A ten-part series will follow, aimed at children.

The Torchwood formula has prompted a similar experiment with Spooks, the BBC One drama. Rogue Spooks will feature young MI5 recruits. The next show to give audiences a sense of deja vu will be Life on Mars, which stars John Simm as Sam Tyler, a detective who is catapulted back to 1973 after a road accident.

BBC One has commissioned a sequel starring Philip Glenister, who plays hard-drinking Detective Chief Inspector Gene Hunt. Provisionally titled Ashes to Ashes, the action picks up the characters in 1981, for a series that the BBC calls "More Miami Vice than The Sweeney".

The BBC said that it was not betraying its obligation to provide new drama. Julian Bellamy, the BBC Three controller, said: "To launch a series with the scale and ambition of Torchwood or Rogue Spooks, it makes sense to draw on a known brand with a loyal audience. But it doesn't mean that we aren't seeking entirely new titles."

Spin-off fever is far from over. Hotel Babylon, the series on BBC One based on the novel by Imogen Edwards-Jones, is expected to lead to further behind-the-scenes dramas set in the airline and fashion industries.

Comedy is not immune. Only Fools and Horses is too big a brand to lie fallow and John Sullivan, the creator, has deposited the popular character Boycie in the sequel The Green, Green Grass. Now he is preparing a prequel, Once Upon a Time in Peckham, which will chart the formative days of Del Boy.

The BBC said that the rash of spin-offs had not prevented the launch of new dramas, such as The Street, by Jimmy McGovern, and Waterloo Road, which is set in a school.