Out of This World (Hot Car) 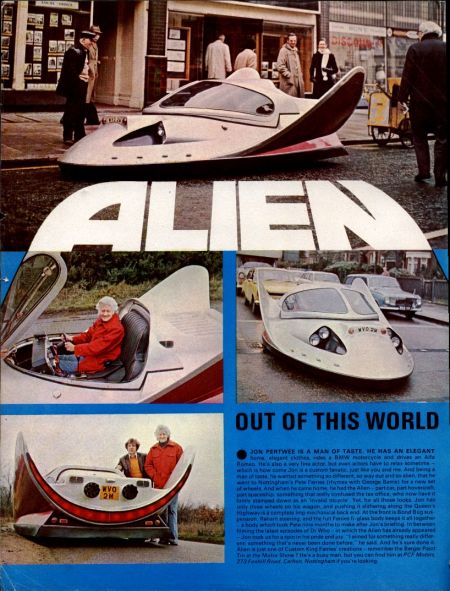 JON PERTWEE IS A MAN OF TASTE. HE HAS AN ELEGANT home, elegant clothes, rides a BMW motorcycle and drives an Alfa Romeo. He's also a very fine actor, but even actors have to relax sometime which is how come Jon is a custom fanatic, just like you and me. And being a man of taste, he wanted something so different, so way out and so alien, that he went to Nottingham's Pete Farries (rhymes with George Barris) for a new set of wheels. And when he came home, he had the Alien - part car, part hovercraft, part spaceship: something that really confused the tax office, who now have it firmly stamped down as an 'invalid tricycle'. Yet, for all those looks, Jon has only three wheels on his wagon, and pushing it slithering along the Queen's Highway is a complete Imp mechanical back end. At the front is Bond Bug suspension, Reliant steering, and the full Farries fi-glass body keeps it all together - a body which took Pete nine months to make after Jon's briefing. In between filming the latest episodes of Dr Who - in which the Alien has already appeared - Jon took us for a spin in his pride and joy. "I aimed for something really different, something that's never been done before," he said. And he's sure done it. Alien is just one of Custom King Farries' creations - remember the Berger Paint Tin at the Motor Show? He's a busy man, but you can find him at PCF Motors. 273 Foxhill Road. Carlton, Nottingham if you're looking.