Out of this world (Bournemouth Advertiser) 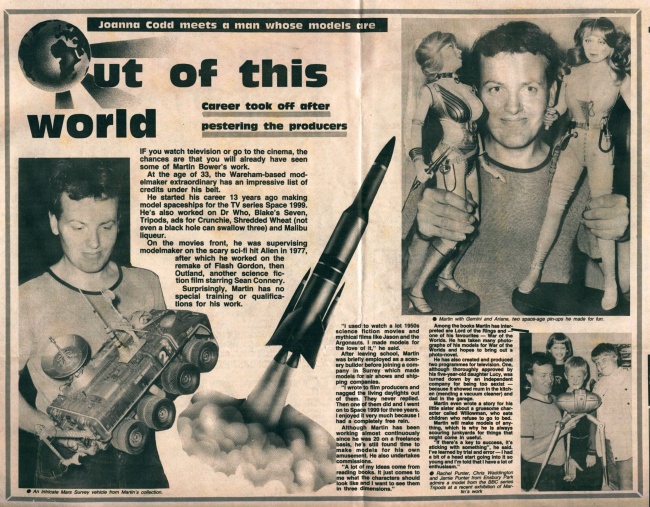 Career took off after pestering the producers

IF you watch television or go to the cinema, the chances are that you will already have seen some of Martin Bower's work.

At the age of 33, the Wareham-based modelmaker extraordinary has an impressive list of credits under his belt.

He started his career 13 years ago making model spaceships for the TV series Space 1999. He's also worked on Dr Who, Blake's Seven, Tripods, ads for Crunchie, Shredded Wheat (not even a black hole can swallow three) and Malibu liqueur.

On the movies front, he was supervising modelmaker on the scary sci-fi hit Alien in 1977, after which he worked on the remake of Flash Gordon, then Outland, another science fiction film starring Sean Connery.

Surprisingly, Martin has no special training or qualifications for his work.

"I used to watch a lot 1950s science fiction movies and mythical films like Jason and the Argonauts. I made models for the love of it," he said.

After leaving school, Martin was briefly employed as a scenery builder before joining a company in Surrey which made models for air shows and shipping companies.

"I wrote to film producers and nagged the living daylights out of them. They never replied. Then one of them did and I went on to Space 1999 for three years. I enjoyed it very much because I had a completely free rein.

Although Martin has been working almost continuously since he was 20 on a freelance basis, he's still found time to make models for his own amusement. He also undertakes commissions.

"A lot of my ideas come from reading books. It just comes to me what the characters should look like and I want to see them in three dimensions."

Among the books Martin has interpreted are Lord of the Rings and —one of his favourites — War of the Worlds. He has taken many photographs of his models for War of the Worlds and hopes to bring out a photo-novel.

He has also created and produced two programmes for television. One, although thoroughly approved by his five-year-old daughter Lucy, was turned down by an independent company for being too sexist —because It showed mum In the kitchen (mending a vacuum cleaner) and dad in the garage.

Martin even wrote a story for his little sister about a gruesome character called Willowman, who eats children who refuse to go to bed.

Martin will make models of anything, which is why he is always scouring Junkyards for things that might come In useful.

"If there's a key to success, It's sticking with something", he said. I've learned by trial and error —I had a bit of a head start going Into it so young and I'm told that I have a lot of enthusiasm."

Caption: Rachel Punter, Chris Waddington and Jamie Punter from Ensbury Park admire a model from the BBC series Tripods at a recent exhibition of Martin's work

Caption: Martin with Gemini and Ariane, two space-age pin-ups he made for fun.