Out of this world (Daily Mail) 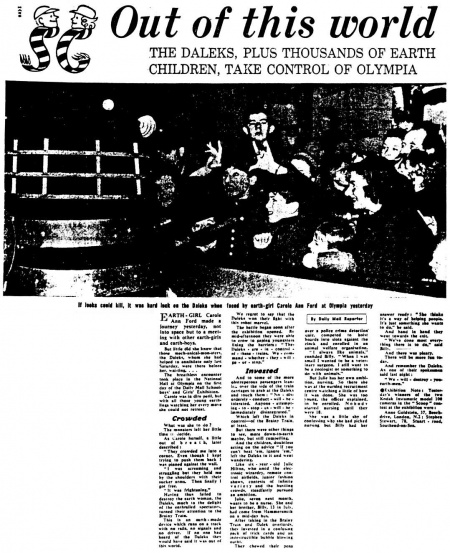 The Daleks, plus thousands of earth children, take control of Olympia

This girl Carole Ann Ford made a journey yesterday, not into space but two meeting with other earth-girls and earth-boys.

But little did she know that those mech-anical-mon-sters the Daleks, whom she had helped to annihilate only last Saturday, were there before her, waiting

The breathless encounter took place in the national hall at Olympia on the first day of the daily mail school boys and girls exhibition.

Carol was in dire peril, but with all those young earthlings watching her every move and she could not retreat.

What was she to do?

The monsters left her little time to decide.

As kill herself, a little out of breath, later described:

They crowded me into a corner. Even though I kept trying to push them back I was pinned against the wall.

I was screaming in struggling but they held me by the shoulders with their soccer arms. Then finally I got free.

Having thus fail to destroy the earth woman, the Daleks, much to the delights of the enthralled spectators, turned their attention to the brainy train.

This is an arrest made device which runs on a track with no rails, no signals and no driver. If no one had heard of the Daleks they would have said it was out of this world.

We regret to say that the Daleks won their fight with this robot marvel.

The battle began soon after the exhibition opened. But by midafternoon they were able to crawl in something youngsters lining the barriers: the Daleks are in control of that something trains. We come and whether they will be of help.

And to some of them or something passengers reading over the side of the train carriages to grab at the Daleks and touch them: "No-disorderly-conduct-will-be tolerated. Anyone-attempting-to-stop-us-will-be-immediately-disintegrated."

Which left the Daleks in control of the Brainy Train, at least.

But there were other things too something, more down-to-earth may be, but still compelling.

But then the children, doubtless acting on the advice "If you can't beat 'em, ignore them," left the Daleks to it and when wandering.

Like six year old Julie Tilton, who may be a lack Tronic wizardly, remote control in the fields, junior fashion shows, contests of infinite variety and the bustling crowds, steadfastly I wrote pursued an ambition.

Julie, seven next month, wants to be a nurse. She and her brother, Billy, 13 in July, had come from Hammersmith on a midday bus.

After taking the brainy train and Dalek overlords, they invested in a confusing pack of trek cards and an indestructible bubble blowing something.

They chewed their pens over please crime detection quiz bay, compelled to best boards late slots against the clock and enrolled in an animal life or organization.

"I always like animals," confided Billy. "When I was small I wanted to be a veterinary surgeon. I still want to be an easy largest or something to do with the animals."

But surely has her own ambition, nursing. So there she was at the nursing recruitment center watching a little of how it was done. She was too young, the officer explained, to be enrolled. Nobody started nursing until there are 18.

She was a little shy of confessing why she had pitched nursing but Billie Hatter answer ready: "She thinks it's a way of helping people. I just something she wants to do," he said.

And hand in hand they went ports the exit.

We've done most everything there is to do, said bailey.

And there was plenty.

There will be more fun to day.

But and the number the Daleks. As one of the spokesman said last night: