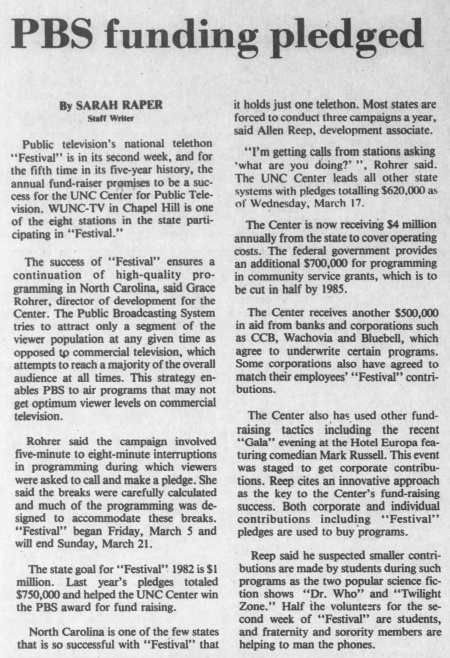 Public television's national telethon "Festival" is in its second week, and for the fifth time in its five-year history, the annual fund-raiser promises to be a success for the UNC Center for Public Television. WUNC-TV in Chapel Hill is one of the eight stations in the state participating in "Festival."

The success of "Festival" ensures a continuation of high-quality programming in North Carolina, said Grace Rohrer, director of development for the Center. The Public Broadcasting System tries to attract only a segment of the viewer population at any given time as opposed to commercial television, which attempts to reach a majority of the overall audience at all times. This strategy enables PBS to air programs that may not get optimum viewer levels on commercial television.

Rohrer said the campaign involved five-minute to eight-minute interruptions in programming during which viewers were asked to call and make a pledge. She said the breaks were carefully calculated and much of the programming was designed to accommodate these breaks. "Festival" began Friday, March 5 and will end Sunday, March 21.

The state goal for "Festival" 1982 is $1 million. Last year's pledges totaled $750,000 and helped the UNC Center win the PBS award for fund raising.

North Carolina is one of the few states that is so successful with "Festival" that it holds just one telethon. Most states are forced to conduct three campaigns a year, said Allen Reep, development associate.

"I'm getting calls from stations asking 'what are you doing?'", Rohrer said. The UNC Center leads all other state systems with pledges totalling $620,000 as of Wednesday, March 17.

The Center is now receiving $4 million annually from the state to cover operating costs. The federal government provides an additional $700,000 for programming in community service grants, which is to be cut in half by 1985.

The Center receives another $500,000 in aid from banks and corporations such as CCB, Wachovia and Bluebell, which agree to underwrite certain programs. Some corporations also have agreed to match their employees' "Festival" contributions.

The Center also. has used other fundraising tactics including the recent "Gala" evening at the Hotel Europa featuring comedian Mark Russell. This event was staged to get corporate contributions. Reep cites an innovative approach as the key to the Center's fund-raising success. Both corporate and individual contributions including "Festival" pledges are used to buy programs.

Reep said he suspected smaller contributions are made by students during such programs as the two popular science fiction shows "Dr. Who" and "Twilight Zone." Half the volunteers for the second week of "Festival" are students, and fraternity and sorority members are helping to man the phones.