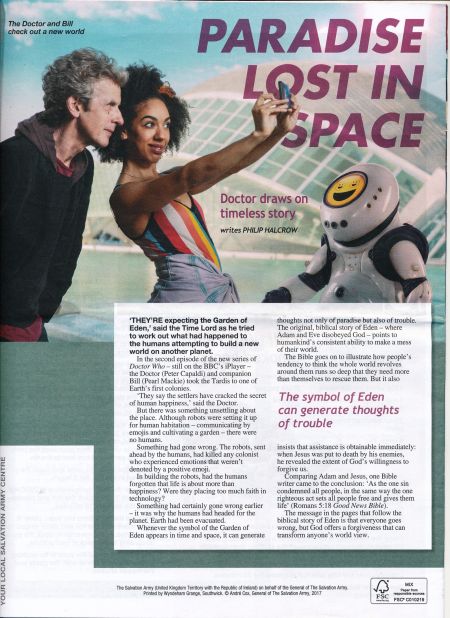 'THEY'RE expecting the Garden of Eden,' said the Time Lord as he tried to work out what had happened to the humans attempting to build a new world on another planet.

In the second episode of the new series of Doctor Who — still on the BBC's iPlayer — the Doctor (Peter Capaldi) and companion Bill (Pearl Mackie) took the Tardis to one of Earth's first colonies.

'They say the settlers have cracked the secret of human happiness,' said the Doctor.

But there was something unsettling about the place. Although robots were setting it up for human habitation — communicating by emojis and cultivating a garden — there were no humans.

Something had gone wrong. The robots, sent ahead by the humans, had killed any colonist who experienced emotions that weren't denoted by a positive emoji.

In building the robots, had the humans forgotten that life is about more than happiness? Were they placing too much faith in technology?

Something had certainly gone wrong earlier — it was why the humans had headed for the planet. Earth had been evacuated.

Whenever the symbol of the Garden of Eden appears in time and space, it can generate thoughts not only of paradise but also of trouble. The original, biblical story of Eden — where Adam and Eve disobeyed God — points to humankind's consistent ability to make a mess of their world.

The Bible goes on to illustrate how people's tendency to think the whole world revolves around them runs so deep that they need more than themselves to rescue them. But it also insists that assistance is obtainable immediately: when Jesus was put to death by his enemies, he revealed the extent of God's willingness to forgive us.

Comparing Adam and Jesus, one Bible writer came to the conclusion: 'As the one sin condemned all people, in the same way the one righteous act sets all people free and gives them life' (Romans 5:18 Good News Bible).

The message in the pages that follow the biblical story of Eden is that everyone goes wrong, but God offers a forgiveness that can transform anyone's world view.

Caption: The Doctor and Bill check out a new world