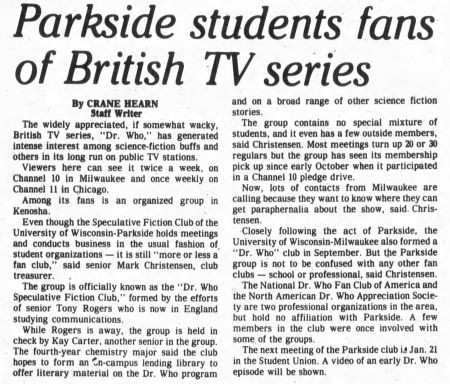 The widely appreciated, if somewhat wacky, British TV series, "Dr. Who," has generated intense interest among science-fiction buffs and others in its long run on public TV stations.

Viewers here can see it twice a week, on Channel 10 in Milwaukee and once weekly on Channel 11 in Chicago.

Among its fans is an organized group in Kenosha.

Even though the Speculative Fiction Club of the University of Wisconsin-Parkside holds meetings and conducts business in the usual fashion of, student organizations — it is still "more or less a fan club," said senior Mark Christensen, club treasurer.

The group is officially known as the "Dr. Who Speculative Fiction Club," formed by the efforts of senior Tony Rogers who is now in England studying communications.

While Rogers is away, the group is held in check by Kay Carter, another senior in the group. The fourth-year chemistry major said the club hopes to form an on-campus lending library to offer literary material on the Dr. Who program and on a broad range of other science fictioostories.

The group contains no special mixture of students, and it even has a few outside members, said Christensen. Most meetings turn up 20 or 30 regulars but the group has seen its membership pick up since early October when it participated in a Channel 10 pledge drive.

Now, lots of contacts from Milwaukee are calling because they want to know where they can get paraphernalia about the show, said Christensen.

Closely following the act of Parkside, the University of Wisconsin-Milwaukee also formed a "Dr. Who club in September. But the Parkside group is not to be confused with any other fan clubs — school or professional, said Christensen.

The National Dr. Who Fan Club of America and the North American Dr. Who Appreciation Society are two professional organizations in the area, but hold no affiliation with Parkside. A few members in the club were once involved with some of the groups.

The next meeting of the Parkside club i3 Jan. 21 in the Student Union. A video of an early Dr. Who episode will be shown.