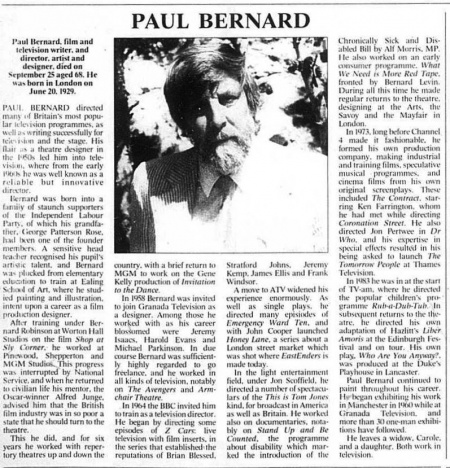 Paul Bernard, film and television writer, and director, artist and designer, died on September 25 aged 68. He was born in London on June 20, 1929.

PAUL BERNARD directed many of Britain's most popular television programmes, as well as writing successfully for television and the stage. His flair as a theatre designer in the 1950s led him into television, where from the early 1960s he was well known as a reliable but innovative director.

Bernard was born into a family of staunch supporters of the Independent Labour Party, of which his grandfather, George Patterson Rose, had been one of the founder members. A sensitive head teacher recognised his pupil's artistic talent, and Bernard was plucked from elementary education to train at Ealing School of Art, where he studied painting and illustration, intent upon a career as a film production designer.

After training under Bernard Robinson at Worton Hall Studios on the film Shop at Sly Corner, he worked at Pinewood, Shepperton and MGM Studios. This progress was interrupted by National Service, and when he returned to civilian life his mentor, the Oscar-winner Alfred Junge, advised him that the British film industry was in so poor a state that he should turn to the theatre.

This he did, and for six years he worked with repertory theatres up and down the country, with a brief return to MGM to work on the Gene Kelly production of Invitation to the Dance.

In 1958 Bernard was invited to join Granada Television as a designer. Among those he worked with as his career blossomed were Jeremy Isaacs, Harold Evans and Michael Parkinson. In due course Bernard was sufficiently highly regarded to go freelance, and he worked in all kinds of television, notably on The Avengers and Armchair Theatre.

In 1964 the BBC invited him to train as a television director. He began by directing some episodes of Z Cars: live television with film inserts, in the series that established the reputations of Brian Blessed, Stratford Johns, Jeremy Kemp, James Ellis and Frank Windsor.

A move to ATV widened his experience enormously. As well as single plays, he directed many episiodes of Emergency Ward Ten, and with John Cooper launched Honey Lane, a series about a London street market which was shot where EastEnders is made today.

In the light entertainment field, under Jon Scoffield, he directed a number of spectaculars of the This is Tom Jones kind, for broadcast in America as well as Britain. He worked also on documentaries, notably on Stand Up and Be Counted, the programme about disability which marked the introduction of the Chronically Sick and Disabled Bill by Alf Morris, MP. He also worked on an early consumer programme, What We Need is More Red Tape, fronted by Bernard Levin. During all this time he made regular returns to the theatre, designing at the Arts, the Savoy and the Mayfair in London.

In 1973, long before Channel 4 made it fashionable, he formed his own production company, making industrial and training films, speculative musical programmes, and cinema films from his own original screenplays. These included The Contract, starring Ken Farrington, whom he had met while directing Coronation Street. He also directed Jon Pertwee in Dr Who, and his expertise in special effects resulted in his being asked to launch The Tomorrow People at Thames Television.

In 1983 he was in at the start of TV-am, where he directed the popular children's programme Rub-a-Dub-Tub. In subsequent returns to the theatre, he directed his own adaptation of Hazlitt's Liber Amoris at the Edinburgh Festival and on tour. His own play, Who Are You Anyway?, was produced at the Duke's Playhouse in Lancaster.

Paul Bernard continued to paint throughout his career. He began exhibiting his work in Manchester in 1960 while at Granada Television, and more than 30 one-man exhibitions have followed.

He leaves a widow, Carole, and a daughter. Both work in television.