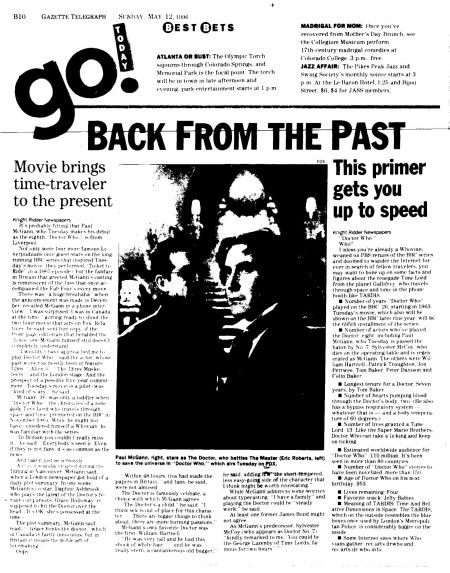 It's probably fitting that Paul McGann, who tonight makes his debut as the eighth "Doctor Who," is from Liverpool.

Not only were four more famous Liverpudlians once guest stars on the long-running BBC series that inspired tonight's movie (they performed "Ticket to Ride" in a 1965 episode), but the fanfare in Britain that greeted McGann's casting is reminiscent of the fuss that once accompanied the Fab Four's every move.

There was "a huge brouhaha" when the announcement was made in December, recalled McGann in a phone interview last week. "I was surprised. I was in Canada at the time," getting ready to shoot the two-hour movie that airs tonight on Fox. Relatives, he said, sent him copy of the front-page editorials that heralded the choice, one McGann himself still doesn't completely understand.

"I wouldn't have approached me to play Doctor Who," said the actor, whose past work has mostly been in feature films ("Alien 3," "The Three Musketeers") and the London stage. And the prospect of' a possible five-year commitment (tonight's movie is a pilot) was "kind of scary," he said.

McGann, 36, was only a toddler when "Doctor Who," the chronicles of a renegade Time Lord who travels through space and time, premiered on the BBC in November 1963. While he might not have considered himself a Whovian, he was familiar with the series.

"In Britain you couldn't really miss it," he said. "Everybody's seen it. Even if they're not fans, it's as common as the news."

And taken just as seriously.

A minor scandal erupted during the filming in Vancouver, McGann said, when a London newspaper got hold of a daily plot summary. In one scene, McGann's co-star, Daphne Ashbrook, who plays the latest of the Doctor's female companions, Grace Holloway, is supposed to hit the Doctor over the head. (It's OK, she's possessed at the time.)

The plot summary, McGann said, read, "'Grace bonks the doctor,' which in Canada is fairly innocuous, but in Britain it means the noble art of lovemaking."

"Within 48 hours, this had made the papers in Britain," and fans, he said, were not amused.

The Doctor is famously celibate, a choice McGann agrees with, even though he's the first of the Doctors to have an onscreen kiss — at least one that gets shown. In the '70s, he said, the Doctor played by Tom Baker got married to his assistant in a two-episode arc, "but then they got cold feet and never aired it."

His own kiss with Grace, he insists, "was very chaste" (although viewers may disagree).

"She happens to be six inches from his mouth at the time so he kisses her," he said. "The Doctor's a child," he said. "I think sex is out of place for this character ... There are bigger things to think about, there are more burning passions." McGann's own favorite Doctor was the first, William Hartnell.

"He was very tall and he had this shock of white hair ... and be was really stern, a cantankerous old bugger," he said, adding it's "the short-tempered, less easy-going side of the character that I think might be worth reinstating."

While McGann admits to some worries about typecasting, "I have a family" (he and his wife, Anne, an artist, live .100 miles from London with sons aged 5 and 7) and playing the Doctor could be "steady work," he said. At least one former James Bond might not agree.

As McGann's predecessor, Sylvester McCoy (who appears tonight as Doctor No. 7) "kindly remarked to me, 'You could he the George Lazenby of Time Lords, famous for two hours."'

The longest-running science fiction series in the world returns tonight as a two-hour movie on Fox.

Unless you're already a Whovian, weaned on PBS reruns of the BBC series and doomed to wander the Internet forever in search of fellow travelers, you may want to bone up on some facts and figures about the renegade Time Lord from the planet Gallifrey:

—Number of hearts pumping blood through the Doctor's body: Two. (He also has a bypass respiratory system — whatever that is — and a body temperature of 60 degrees.)

—Number of lives granted a Time Lord: 13. Like the Super Mario Brothers, Doctor Who can take a licking and keep on ticking.