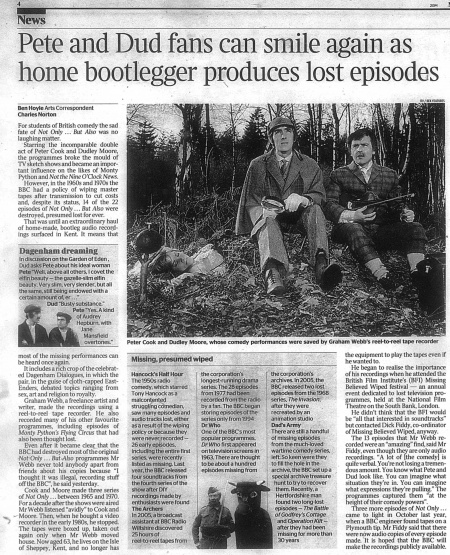 For students of British comedy the sad fate of Not Only ... But Also was no laughing matter.

Starring the incomparable double act of Peter Cook and Dudley Moore, the programmes broke the mould of TV sketch shows and became an important influence on the likes of Monty Python and Not the Nine O'Clock News.

However, in the 1960s and 1970s the BBC had a policy of wiping master tapes after transmission to cut costs and, despite its status, 14 of the 22 episodes of Not Only ... But Also were destroyed, presumed lost for ever.

That was until an extraordinary haul of home-made, bootleg audio recordings surfaced in Kent. It means that most of the missing performances can be heard once again.

It includes a rich crop of the celebrated Dagenham Dialogues, in which the pair, in the guise of cloth-capped East-Enders, debated topics ranging from sex, art and religion to royalty.

Graham Webb, a freelance artist and writer, made the recordings using a reel-to-reel tape recorder. He also recorded many of his other favourite programmes, including episodes of Monty Python's Flying Circus that had also been thought lost

Even after it became clear that the BBC had destroyed most of the original Not Only ... But Also programmes Mr Webb never told anybody apart from friends about his copies because "I thought it was illegal, recording stuff off the BBC", he said yesterday.

Cook and Moore made three series of Not Only ... between 1965 and 1970. For a decade after the shows were aired Mr Webb listened "avidly" to Cook and — Moore. Then, when he bought a video recorder in the early 1980s, he stopped. The tapes were boxed up, taken out again only when Mr Webb moved house. Now aged 63, he lives on the Isle of Sheppey, Kent, and no longer has the equipment to play the tapes even if he wanted to.

He began to realise the importance of his recordings when he attended the British Film Institute's (BFI) Missing Believed Wiped festival — an annual event dedicated to lost television programmes, held at the National Film Theatre on the South Bank, London.

He didn't think that the BFI would be "all that interested in soundtracks" but contacted Dick Fiddy, co-ordinator of Missing Believed Wiped, anyway.

The 13 episodes that Mr Webb recorded were an "amazing" find, said Mr Fiddy, even though they are only audio recordings. "A lot of [the comedy] is quite verbal. You're not losing a tremendous amount You know what Pete and Dud look like. You can imagine what situation they're in. You can imagine what expressions they're pulling." The programmes captured them "at the height of their comedy powers".

Three more episodes of Not Only ... came to light in October last year, when a BBC engineer found tapes on a Plymouth tip. Mr Fiddy said that there were now audio copies of every episode made. It is hoped that the BBC will make the recordings publicly available.

Hancock's Half Hour The 1950s radio comedy, which starred Tony Hancock as a malcontented struggling comedian, saw many episodes and audio tracks lost, either as a result of the wiping policy or because they were never recorded —26 early episodes, including the entire first series, were recently listed as missing. Last year, the BBC released four soundtracks from the fourth series of the show after DIY recordings made by enthusiasts were found

In 2005, a broadcast assistant at BBC Radio Wiltshire discovered 25 hours of reel-to-reel tapes from the corporation's longest-running drama series. The 28 episodes from 1977 had been recorded from the radio by a fan. The BBC began storing episodes of the series only from 1994

One of the BBC's most popular programmes, Dr Who first appeared on television screens in 1963. There are thought to be about a hundred episodes missing from the corporation's archives. In 2005, the BBC released two lost episodes from the 1968 series, The Invasion, after they were recreated by an animation studio

There are still a handful of missing episodes from the much-loved wartime comedy series, left. So keen were they to fill the hole in the archive, the BBC set up a special archive treasure hunt to try to recover them. Recently, a Hertfordshire man found two long-lost episodes — The Battle of Godfrey's Cottage and Operation Kilt — after they had been missing for more than 30 years