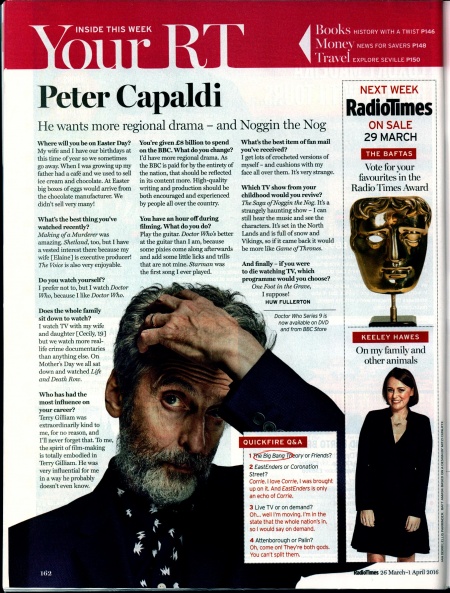 He wants more regional drama - and Noggin the Nog

Where will you be on Easter Day?

My wife and I have our birthdays at this time of year so we sometimes go away. When I was growing up my father had a cafe and we used to sell ice cream and chocolate. At Easter big boxes of eggs would arrive from the chocolate manufacturer. We didn't sell very many!

Making of a Murderer was amazing. Shetland, too, but I have a vested interest there because my wife [Elaine] is executive producer! The Voice is also very enjoyable.

Do you watch yourself?

I prefer not to, but I watch Doctor Who, because I like Doctor Who.

Does the whole family sit down to watch?

I watch TV with my wife and daughter [Cecily, 19] but we watch more real-life crime documentaries than anything else. On Mother's Day we all sat down and watched Life and Death Row.

Who has had the most influence on your career?

Terry Gilliam was extraordinarily kind to me, for no reason, and I'll never forget that. To me, the spirit of film-making is totally embodied in Terry Gilliam. He was very influential for me in a way he probably doesn't even know.

You're given £8 billion to spend on the BBC. What do you change?

I'd have more regional drama. As the BBC is paid for by the entirety of the nation, that should be reflected in its content more. High-quality writing and production should be both encouraged and experienced by people all over the country.

You have an hour off during filming. What do you do?

Play the guitar. Doctor Who's better at the guitar than I am, because some pixies come along afterwards and add some little licks and trills that are not mine. Starman was the first song I ever played.

I get lots of crocheted versions of myself - and cushions with my face all over them. It's very strange.

Which TV show from your childhood would you revive?

The Saga of Noggin the Nog. It's a strangely haunting show - I can still hear the music and see the characters. It's set in the North Lands and is full of snow and Vikings, so if it came back it would be more like Game of Thrones.

And finally - if you were to die watching TV, which programme would you choose?

One Foot in the Grave, I suppose!

Corrie. I love Corrie, I was brought up on it. And EastEnders is only an echo of Corrie.

Oh... well I'm moving. I'm in the state that the whole nation's in, so I would say on demand.

Oh, come on! They're both gods. You can't split them.