Peter Capaldi: Leaving 'Doctor Who' is sweet, not bittersweet 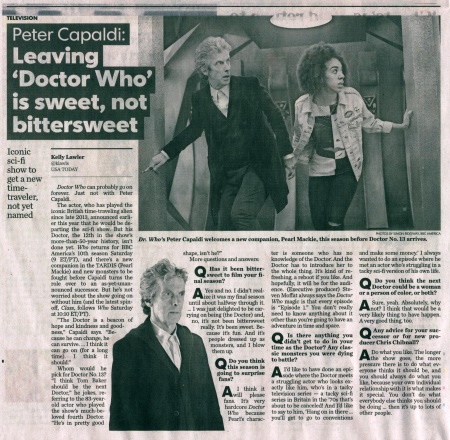 Iconic sci-fi show to get a new time-traveler, not yet named

Doctor Who can probably go on forever. Just not with Peter Capaldi.

The actor, who has played the iconic British time-traveling alien since late 2013, announced earlier this year that he would be departing the sci-fi show. But his Doctor, the 12th in the show's more-than-50-year history, isn't done yet. Who returns for BBC America's 10th season Saturday (9 ET/PT), and there's a new companion in the TARDIS (Pearl Mackie) and new monsters to be fought before Capaldi turns the role over to an as-yet-unannounced successor. But he's not worried about the show going on without him (and the latest spinoff, Class, follows Who Saturday at 10:10 ET/PT).

"The Doctor is a beacon of hope and kindness and goodness," Capaldi says. "Because he can change, he can survive. I think it can go on (for a long time). I think it should."

Whom would he pick for Doctor No. 13? "I think Tom Baker should be the next Doctor," he jokes, referring to the 83-year-old actor who played the show's much-beloved fourth Doctor. "He's in pretty good shape, isn't he?"

Q Has it been bittersweet to film your final season?

A Yes and no. I didn't realize it was my final season until about halfway through it. I was just delighted to be carrying on being (the Doctor) and, no, it's not been bittersweet really. It's been sweet. Because it's fun. And it's people dressed up as monsters, and I blow them up.

Q Do you think this season is going to surprise fans?

A I think it will please fans. It's very hardcore Doctor Who because Pearl's character is someone who has no knowledge of the Doctor. And the Doctor has to introduce her to the whole thing. It's kind of refreshing, a reboot if you like. And hopefully, it will be for the audience. (Executive producer) Steven Moffat always says the Doctor Who magic is that every episode is "Episode 1." You don't really need to know anything about it other than you're going to have an adventure in time and space.

Q Is there anything you didn't get to do in your time as the Doctor? Any classic monsters you were dying to battle?

A I'd like to have done an episode where the Doctor meets a struggling actor who looks exactly like him, who's in a tacky television series -- a tacky sci-fi series in Britain in the '70s that's about to be canceled! And I'd like to say to him, 'Hang on in there you'll get to go to conventions and make some money.' I always wanted to do an episode where he met an actor who's struggling in a tacky sci-fi version of his own life.

Q Do you think the next Doctor could be a woman or a person of color, or both?

A Sure, yeah. Absolutely, why not? I think that would be a very likely thing to have happen. A very good thing, too.

Q Any advice for your successor or for new producer Chris Chibnall?

A Do what you like. The longer the show goes, the more pressure there is to do what everyone thinks it should be, and you should always do what you like, because your own individual relationship with it is what makes it special. You don't do what everybody else thinks you should be doing then it's up to lots of other people.