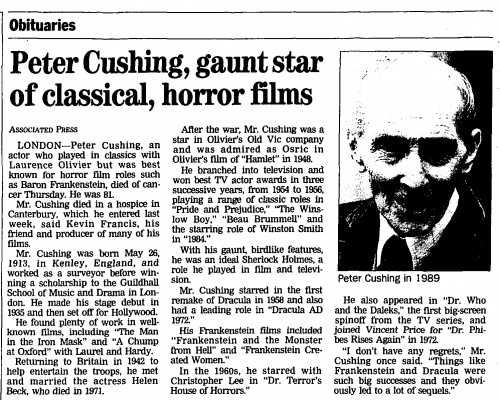 LONDON—Peter Cushing, an actor who played in classics with Laurence Olivier but was best known for horror film roles such as Baron Frankenstein, died of cancer Thursday. He was 81.

Mr. Cushing died in a hospice in Canterbury, which he entered last week, said Kevin Francis, his friend and producer of many of his films.

Mr. Cushing was born May 26, 1913, in Kenley, England, and worked as a surveyor before winning a scholarship to the Guildhall School of Music and Drama in London. He made his stage debut in 1935 and then set off for Hollywood.

He found plenty of work in well-known films, including "The Man in the Iron Mask" and "A Chump at Oxford" with Laurel and Hardy.

Returning to Britain in 1942 to help entertain the troops, he met and married the actress Helen Beck, who died in 1971.

After the war, Mr. Cushing was a star in Olivier's Old Vic company and was admired as Osric in Olivier's film of "Hamlet" in 1948.

He branched into television and won best TV actor awards in three successive years, from 1954 to 1956, playing a range of classic roles In "Pride and Prejudice," 'The Winslow Boy," "Beau Brummell" and the starring role of Winston Smith in "1984."

With his gaunt, birdlike features, he was an ideal Sherlock Holmes, a role he played in film and television.

Mr. Cushing starred in the first remake of Dracula in 1958 and also had a leading role in "Dracula AD 1972."

In the 1960s, he starred with Christopher Lee in "Dr. Terror's House of Horrors."

He also appeared in "Dr. Who and the Daleks," the first big-screen spinoff from the TV series, and joined Vincent Price for "Dr. Phibes Rises Again" in 1972.

"I don't have any regrets," Mr. Cushing once said. "Things like Frankenstein and Dracula were such big successes and they obviously led to a lot of sequels."