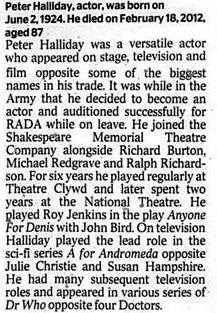 Peter Halliday was a versatile actor who appeared on stage, television and film opposite some of the biggest names in his trade. It was while in the Army that he decided to become an actor and auditioned successfully for RADA while on leave. He joined the Shakespeare Memorial Theatre Company alongside Richard Burton, Michael Redgrave and Ralph Richardson. For six years he played regularly at Theatre Clywd and later spent two years at the National Theatre. He played Roy Jenkins in the play Anyone For Denis with John Bird. On television Halliday played the lead role in the sci-fi series A for Andromeda opposite Julie Christie and Susan Hampshire. He had many subsequent television roles and appeared in various series of Dr Who opposite four Doctors.