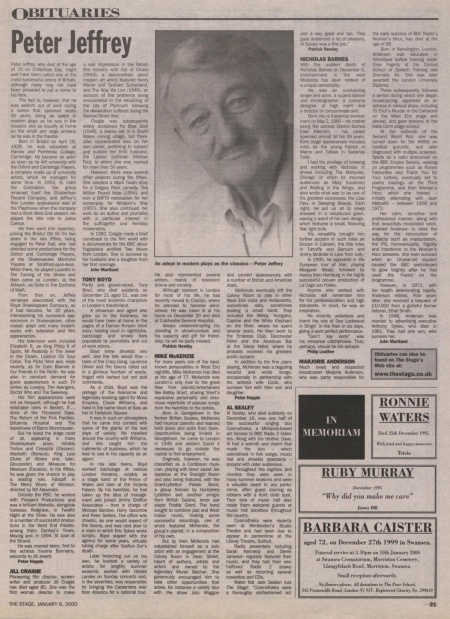 As adept in modern plays as the classics - Peter Jeffrey

Peter Jeffrey, who died at the age of 70 on Christmas Day, might well have been called one of the most successful actors in Britain, although many may not have been prepared to put a name to his face.

The fact is, however, that he was seldom out of work during a career that spanned nearly 50 years, being as adept in modern plays as he was in the classics and as equally at home on the small and large screens as he was in the theatre.

Born in Bristol on April 18, 1929. he was educated at Harrow and Pembroke College, Cambridge. He became an actor as soon as he left university with the Oxford and Cambridge Players, a company made up of university actors, which he managed for some time. In 1953, to mark the Coronation, the group renamed itself the Elizabethan Theatre Company, and Jeffrey's first London appearance was at the Playhouse when the company had a short West End season. He played the title role in Julius Caesar.

He then went into repertory, joining the Bristol Old Vic for two years in the late fifties, being engaged by Peter Hall, who had directed some productions for the Oxford and Cambridge Players, at the Shakespeare Memorial Theatre at Stratford-upon-Avon. While there, he played Lucentio in The Taming of the Shrew and then came to London, at the Aldwych, as Delio in The Duchess of Malfi.

From then on, Jeffrey remained associated with the Royal Shakespeare Company, as it had become, for 30 years, interspersing his numerous appearances in Shakespeare, other classic plays and many modern works with television and film appearances.

His television work included Elizabeth R, as King Philip II of Spain, Mr Peabody in The Jewel in the Crown, Lipstick On Your Collar, The Pistol Shot and, more recently, as Sir Colin Blamire in Our Friends in the North. He was also in constant demand for guest appearances in such TV series as Lovejoy, The Avengers, Doctor Who and The Sweeney.

His film appearances were not as frequent, although he had relishable roles in Becket, If..., Anne of the Thousand Days, The Return of the Pink Panther, Britannia Hospital and The Adventures of Baron Munchausen.

But he loved the stage most of all, appearing in many Shakespeare plays, notably Troilus and Cressida (Ulysses), Macbeth (Banquo), King Lear (Duke of Albany and, later, Gloucester) and Measure for Measure (Escalus). In his fifties, he was given the chance to play a leading role, Falstaff in The Merry Wives of Windsor, directed by Bill Alexander.

Outside the RSC, he worked with Prospect Productions and was a brilliant Malvolio, alongside Vanessa Redgrave, in Twelfth Night at the Shaw. He was also in a number of successful productions in the West End theatre, among them Donkey's Years, Moving and, in 1994, St Joan at the Strand.

He was married twice, first to the actress Yvonne Bonnamy, secondly to Jill Jowett.