Peter bows out and a woman may take over 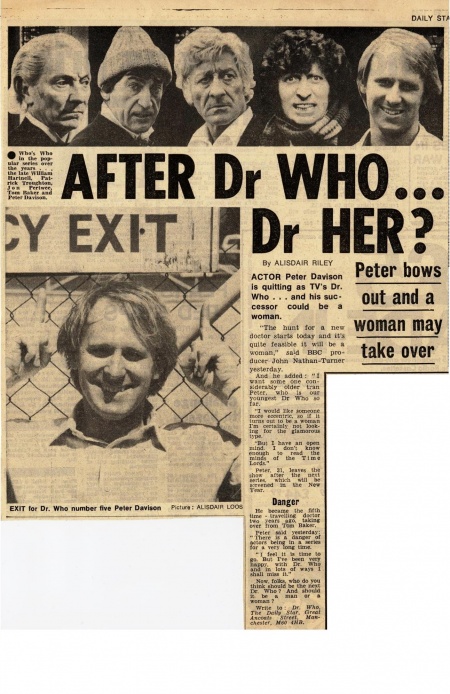 ACTOR Peter Davison is quitting as TV's Dr. Who ... and his successor could be a woman.

"The hunt for a new doctor starts today and it's quite feasible it will be a woman," said BBC producer John Nathan-Turner yesterday.

And he added : "I want some one considerably older than Peter, who is our youngest Dr Who so far.

"I would like someone more eccentric, so if it turns out to be a woman I'm certainly not looking for the glamorous type.

"But I have an open mind. I don't know enough to read the minds of the Time Lords."

Peter, 31, leaves the show after the next series. which will be screened in the New Year.

He became the fifth time - travelling doctor two years ago, taking over from Tom Baker.

Peter said yesterday: "There is a danger of actors being in a series for a very long time.

"I feel it is time to go. But I've been very happy, with Dr. Who and in lots of ways I shall miss it."

Now. folks, who do you think should be the next Dr. Who? And should it be a man or a woman?