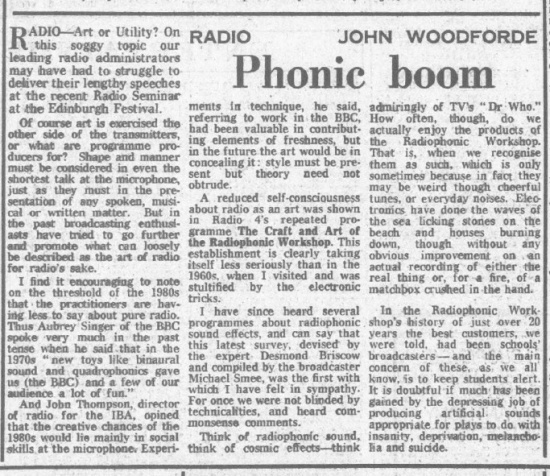 A reduced self-consciousness about radio as an art was shown in Radio 4's repeated programme. The Craft and Art of the Radiophonic Workshop. This establishment is clearly taking itself less seriously than in the 1960s, when I visited and was stultified by the electronic tricks.

I have since heard several programmes about radiophonic sound effects, and can say that this latest survey, devised by the expert Desmond Briscow and compiled by the broadcaster Michael Smee, was the first with which I have felt in sympathy. For once we were not blinded by technicalities, and heard commonsense comments.

Think of radiophonic sound, think of cosmic effects—think admiringly of TV's "Dr Who." How often, though, do we actually enjoy the products of the Radiophonic Workshop. That is, when we recognise them as such. which is only sometimes because in fact they may be weird though cheerful tunes, or everyday noises. Electronics have done the waves' of the sea licking stones on the beach and houses burning down, though without any obvious improvement on an actual recording of either the real thing or, for a fire, of a matchbox crushed in the hand.

In the Radiophonic Workshop's history of just over 20 years the best customers, we were told. had been schools' broadcasters—and the main concern of these, as we all know, is to keep students alert. It is doubtful if much has been gained by the depressing job of producing artificial. sounds appropriate for plays to do with insanity, deprivation, melancholia and suicide.