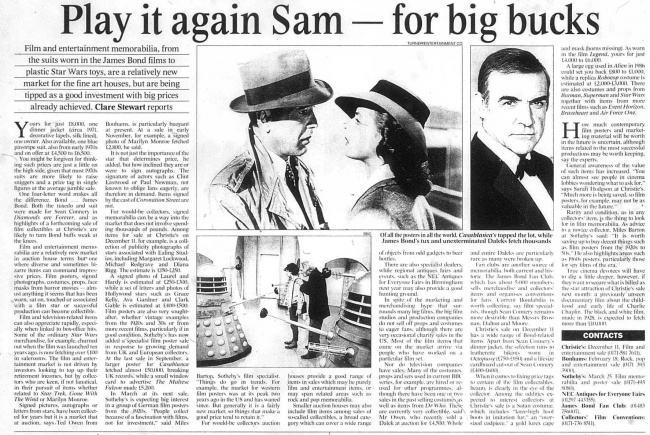 Film and entertainment memorabilia, from the suits worn in the James Bond films to plastic Star Wars toys, are a relatively new market for the fine art houses, but are being tipped as a good investment with big prices already achieved. Clare Stewart reports.

You might be forgiven for thinking such prices are just a little on the high side, given that most 1970s suits are more likely to raise sniggers and a price tag in single figures at the average jumble sale.

One four-letter word makes all the difference. Bond...James Bond. Both the tuxedo and suit were made for Sean Connery in Diamonds are Forever, and as highlights of a forthcoming sale of film collectibles at Christie's are likely to turn Bond buffs weak at the knees.

Film and entertainment memorabilia are a relatively new market in auction house terms but one where diverse and sometimes bizarre items can command impressive prices. Film posters, signed photographs, costumes, props, face masks from horror movies - almost anything it seems that has been worn, sat on, touched or associated with a film star or successful production can become collectible.

Film and television-related items can also appreciate rapidly, especially when linked to box-office hits. Some of the ordinary Star Wars merchandise, for example, churned out when the film was launched ten years ago, is now fetching over £100 in salerooms. The film and entertainment market is not driven by investors looking to top up their retirement incomes, but by collectors who are keen, if not fanatical, in their pursuit of items whether related to Star Trek, Gone With The Wind or Marilyn Monroe.

Signed pictures, autographs or letters from stars, have been collected for years but it is a market that at auction, says Ted Owen from Bonhams, is particularly buoyant at present. At a sale in early November, for example, a signed photo of Marilyn Monroe fetched £2,800, he said.

It is not just the importance of the star that determines price, he added, but how inclined they are or were to sign autographs. The signature of actors such as Clint Eastwood or Paul Newman, not known to oblige fans eagerly, are therefore in demand. Items signed by the cast of Coronation Street are not.

For would-be collectors, signed memorabilia can be a way into the market that does not involve spending thousands of pounds. Among items for sale at Christie's on December 11, for example, is a collection of publicity photographs of stars associated with Ealing Studios, including Margaret Lockwood, Michael Redgrave and Diana Rigg. The estimate is £150-£250.

A signed photo of Laurel and Hardy is estimated at £250- £300, while a set of letters and photos of Hollywood stars such as Grace Kelly, Ava Gardner and Clark Gable is estimated at £400-£500. Film posters are also very sought-after, whether vintage examples from the 1920s and 30s or from more recent films, particularly if in good condition. Sotheby's has now added a specialist film poster sale in response to growing demand from UK and European collectors. At the last sale in September, a larger poster for Casablanca fetched almost £50,000, breaking UK records, while a small window card to advertise The Maltese Falcon made £5,200.

In March at its next sale, Sotheby's is expecting big interest in a group of German film posters from the 1920s. "People collect because of a fascination with films, not for investment," said Miles Barton, Sotheby's film specialist. "Things do go in trends. For example, the market for western film posters was at its peak two years ago in the US and has waned since. But generally it is a fairly new market, so things that make a good price tend to retain it."

For would-be collectors auction houses provide a good range of items in sales which may be purely film and entertainment items, or may span related areas such as rock and pop memorabilia.

Smaller auction houses may also include film items among sales of so-called collectibles, a broad category which can cover a wide range of objects from odd gadgets to beer bottles.

There are also specialist dealers, while regional antiques fairs and events, such as the NEC Antiques for Everyone Fairs in Birmingham next year may also provide a good hunting ground.

In spite of the marketing and merchandising hype that surrounds many big films, the big film studios and production companies do not sell off props and costumes to eager fans, although there are very occasional charity sales in the US. Most of the film items that come on the market arrive via people who have worked on a particular film set.

Nor do television companies have sales. Many of the costumes, props and sets used in current BBC series, for example, are hired or re-used for other programmes, although there have been one or two sales in the past selling costumes as well as items from Dr Who. These are currently very collectible, said Mr Owen, who recently sold a Dalek at auction for £4,500. Whole and entire Daleks are particularly rare as many were broken up.

Fan clubs are another source of memorabilia, both current and historic. The James Bond Fan Club, which has about 5,000 members, sells merchandise and collectors' items and organises conventions for fans. Current Bondabilia is worth collecting, say film specialists, though Sean Connery remains more desirable than Messrs Brosnan, Dalton and Moore.

Christie's sale on December 11 has a wide range of Bond-related items. Apart from Sean Connery's dinner jacket, the selection runs to leatherette bikinis worn in Octopussy (£750-£950) and a lifesize cardboard cut-out of Sean Connery (£400-£600).

When it comes to fixing price tags to certain of the film collectables, beauty is clearly in the eye of the collector. Among the oddities expected to interest collectors at Christie's sale is a Satan costume, which includes "knee-high hoof boots in imitation fur," an "oversized codpiece," a gold lurex cape and mask (horns missing). As worn in the film Legend, yours for just £4,000 to £6,000.

A large egg used in Alien in 1986 could set you back £800 to £1,000, while a replica Robocop costume is estimated at £2,000-£3,000. There are also costumes and props from Batman, Superman and Star Wars together with items from more recent films such as Event Horizon, Braveheart and Air Force One.

How much contemporary film posters and marketing material will be worth in the future is uncertain, although items related to the most successful productions may be worth keeping, say the experts.

General awareness of the value of such items has increased. "You can almost see people in cinema lobbies wondering what to ask for," says Sarah Hodgson at Christie's. "Much more is being saved, so film posters, for example, may not be as valuable in the future."

Rarity and condition, as in any collectors' item, is the thing to look for in film memorabilia. As advice to a novice collector, Miles Barton at Sotheby's said: "It is worth saving up to buy decent things such as film posters from the 1920s to 50s." He also highlights areas such as 1960s posters, particularly those for spy films of the era.

True cinema devotees will have to dig a little deeper, however, if they want to secure what is billed as the star attraction of Christie's sale next month: a previously unseen documentary film about the childhood and early life of Charlie Chaplin. The black and white film, made in 1928, is expected to fetch more than £10,000.

Caption: Of all the posters in all the world, Casablanca's topped the lot, while James Bond's tux and unexterminated Daleks fetch thousands.