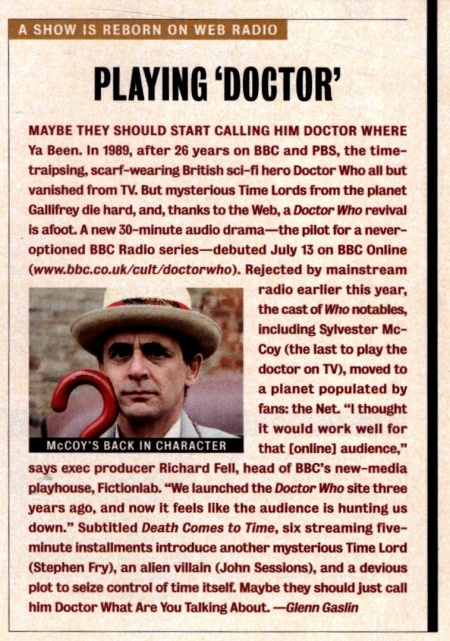 MAYBE THEY SHOULD START CALLING HIM DOCTOR WHERE Ya Been. In 1989, after 26 years on BBC and PBS, the time-traipsing, scarf-wearing British sci-fi hero Doctor Who all but vanished from TV. But mysterious Time Lords from the planet Gallifrey die hard, and, thanks to the Web, a Doctor Who revival is afoot. A new 30-minute audio drama--the pilot for a never-optioned BBC Radio series--debuted July 13 on BBC Online (www.bbc.co.uk/cult/doctorwho). Rejected by mainstream radio earlier this year, the cast of Who notables, including Sylvester McCoy (the last to play the doctor on TV), moved to a planet populated by fans: the Net. "I thought it would work well for that [online] audience," says exec producer Richard Fell, head of BBC's new-media playhouse, Fictionlab. "We launched the Doctor Who site three years ago, and now it feels like the audience is hunting us down." Subtitled Death Comes to Time, six streaming five-minute installments introduce another mysterious Time Lord (Stephen Fry), an alien villain (John Sessions), and a devious plot to seize control of time itself. Maybe they should just call him Doctor What Are You Talking About.

Caption: McCoy's back in character