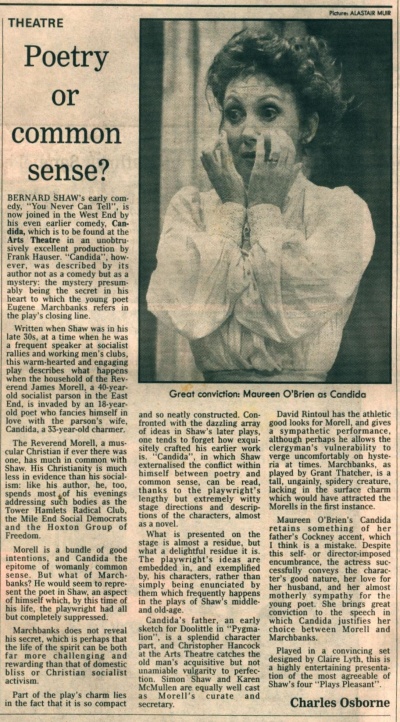 BERNARD SHAW's early comedy, "You Never Can Tell", is now joined in the West End by his even earlier comedy, Can-dida, which is to be found at the Arts Theatre in an unobtrusively excellent production by Frank Hauser. "Candida", however, was described by its author not as a comedy but as a mystery: the mystery presumably being the secret in his heart to which the young poet Eugene Marchbanks refers in the play's closing line.

Written when Shaw was in his late 30s, at a time when he was a frequent speaker at socialist rallies and working men's clubs, this warm-hearted and engaging play describes what happens when the household of the Reverend James Morell, a 40-year-old socialist parson in the East End, is invaded by an 18-year-old poet who fancies himself in love with the parson's wife, Candida, a 33-year-old charmer.

The Reverend Morell, a muscular Christian if ever there was one, has much in common with Shaw. His Christianity is much less in evidence than his socialism: like his author, he, too, spends most ,of his evenings addressing such bodies as the Tower Hamlets Radical Club, the Mile End Social Democrats and the Hoxton Group of Freedom.

Morell is a bundle of good intentions, and Candida the epitome of womanly common sense. But what of March-banks? He would seem to represent the poet in Shaw, an aspect of himself which, by this time of his life, the playwright had all but completely suppressed.

Marchbanks does not reveal his secret, which is perhaps that the life of the spirit can be both far more challenging and rewarding than that of domestic bliss or Christian socialist activism.

Part of the play's charm lies in the fact that it is so compact and so neatly constructed. Confronted with the dazzling array of ideas in Shaw's later plays, one tends to forget how exquisitely crafted his earlier work is. "Candida", in which Shaw externalised the conflict within himself between poetry and common sense, can be read, thanks to the playwright's lengthy but extremely witty stage directions and descriptions of the characters, almost as a novel.

What is presented on the stage is almost a residue, but what a delightful residue it is. The playwright's ideas are embedded in, and exemplified by, his characters, rather than simply being enunciated by them which frequently happens in the plays of Shaw's middle-and old-age.

Candida's father, an early sketch for Doolittle in "Pygmalion", is a splendid character part, and Christopher Hancock at the Arts Theatre catches the old man's acquisitive but not unamiable vulgarity to perfection. Simon Shaw and Karen McMullen are equally well cast as Morell's curate and secretary.

David Rintoul has the athletic good looks for Morell, and gives a sympathetic performance, although perhaps he allows the clergyman's vulnerability to verge uncomfortably on hysteria at times. Marchbanks, as played by Grant Thatcher, is a tall, ungainly, spidery creature, lacking in the surface charm which would have attracted the Morel's in the first instance.

Maureen O'Brien's Candida retains something of her father's Cockney accent, which I think is a mistake. Despite this self- or director-imposed encumbrance, the actress successfully conveys the character's good nature, her love for her husband, and her almost motherly sympathy for the young poet. She brings great conviction to the speech in which Candida justifies her choice between Morell and Marchbanks.

Played in a convincing set designed by Claire Lyth, this is a highly entertaining presentation of the most agreeable of Shaw's four "Plays Pleasant".