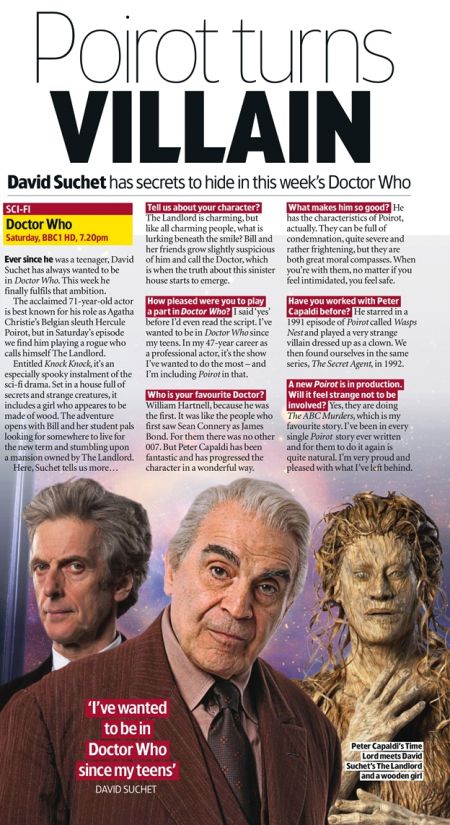 David Suchet has secrets to hide in this week's Doctor Who

Ever since he was a teenager, David Suchet has always wanted to be in Doctor Who. This week he finally fulfils that ambition.

The acclaimed 71-year-old actor is best known for his role as Agatha Christie's Belgian sleuth Hercule Poirot, but in Saturday's episode we find him playing a rogue who calls himself The Landlord.

Entitled Knock Knock, it's an especially spooky instalment of the sci-fi drama. Set in a house full of secrets and strange creatures, it includes a girl who appeares to be made of wood. The adventure opens with Bill and her student pals looking for somewhere to live for the new term and stumbling upon a mansion owned by The Landlord.

Tell us about your character?

The Landlord is charming, but like all charming people, what is lurking beneath the smile? Bill and her friends grow slightly suspicious of him and call the Doctor, which is when the truth about this sinister house starts to emerge.

How pleased were you to play a part in Doctor Who?

I said 'yes' before I'd even read the script. I've wanted to be in Doctor Who since my teens. In my 47-year career as a professional actor, it's the show I've wanted to do the most — and I'm including Poirot in that.

Who is your favourite Doctor?

William Hartnell, because he was the first. It was like the people who first saw Sean Connery as James Bond. For them there was no other 007. But Peter Capaldi has been fantastic and has progressed the character in a wonderful way.

What makes him so good?

He has the characteristics of Poirot, actually. They can be full of condemnation, quite severe and rather frightening, but they are both great moral compasses. When you're with them, no matter if you feel intimidated, you feel safe.

Have you worked with Peter Capaldi before?

He starred in a 1991 episode of Poirot called Wasps Nest and played a very strange villain dressed up as a clown. We then found ourselves in the same series, The Secret Agent, in 1992.

A new Poirot is in production. Will it feel strange not to be involved?

Yes, they are doing The ABC Murders, which is my favourite story. I've been in every single Poirot story ever written and for them to do it again is quite natural. I'm very proud and pleased with what I've left behind.