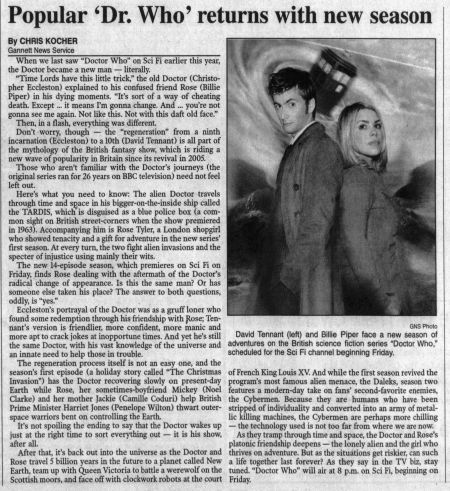 When we last saw "Doctor Who" on Sci Fi earlier this year, the Doctor became a new man — literally.

"Time Lords have this little trick," the old Doctor (Christopher Eccleston) explained to his confused friend Rose (Billie Piper) in his dying moments. "It's sort of a way of cheating death. Except ... it means I'm gonna change. And ... you're not gonna see me again. Not like this. Not with this daft old face."

Then, in a flash, everything was different.

Don't worry, though — the "regeneration" from a ninth incarnation (Eccleston) to a 10th (David Tennant) is all part of the mythology of the British fantasy show, which is riding a new wave of popularity in Britain since its revival in 2005.

Those who aren't familiar with the Doctor's journeys (the original series ran for 26 years on BBC television) need not feel left out.

Here's what you need to know: The alien Doctor travels through time and space in his bigger-on-the-inside ship called the TARDIS, which is disguised as a blue police box (a common sight on British street-corners when the show premiered in 1963). Accompanying him is Rose Tyler, a London shopgirl who showed tenacity and a gift for adventure in the new series' first season. At every turn, the two fight alien invasions and the specter of injustice using mainly their wits.

The new 14-episode season, which premieres on Sci Fi on Friday, finds Rose dealing with the aftermath of the Doctor's radical change of appearance. Is this the same man? Or has someone else taken his place? The answer to both questions, oddly, is "yes."

Eccleston's portrayal of the Doctor was as a gruff loner who found some redemption through his friendship with Rose; Tennant's version is friendlier, more confident, more manic and more apt to crack jokes at inopportune times. And yet he's still the same Doctor, with his vast knowledge of the universe and an innate need to help those in trouble.

The regeneration process itself is not an easy one, and the season's first episode (a holiday story called "The Christmas Invasion") has the Doctor recovering slowly on present-day Earth while Rose, her sometimes-boyfriend Mickey (Noel Clarke) and her mother Jackie (Camille Coduri) help British Prime Minister Harriet Jones (Penelope Wilton) thwart outer-space warriors bent on controlling the Earth.

It's not spoiling the ending to say that the Doctor wakes up just at the right time to sort everything out — it is his show, after all.

After that, it's back out into the universe as the Doctor and Rose travel 5 billion years in the future to a planet called New Earth, team up with Queen Victoria to battle a werewolf on the Scottish moors, and face off with clockwork robots at the court of French King Louis XV. And while the first season revived the program's most famous alien menace, the Daleks, season two features a modern-day take on fans' second-favorite enemies, the Cybermen. Because they are humans who have been stripped of individuality and converted into an army of metallic killing machines, the Cybermen are perhaps more chilling — the technology used is not too far from where we are now.

As they tramp through time and space, the Doctor and Rose's platonic friendship deepens — the lonely alien and the girl who thrives on adventure. But as the situations get riskier, can such a life together last forever? As they say in the TV biz, stay tuned. "Doctor Who" will air at 8 p.m. on Sci Fi, beginning on Friday.