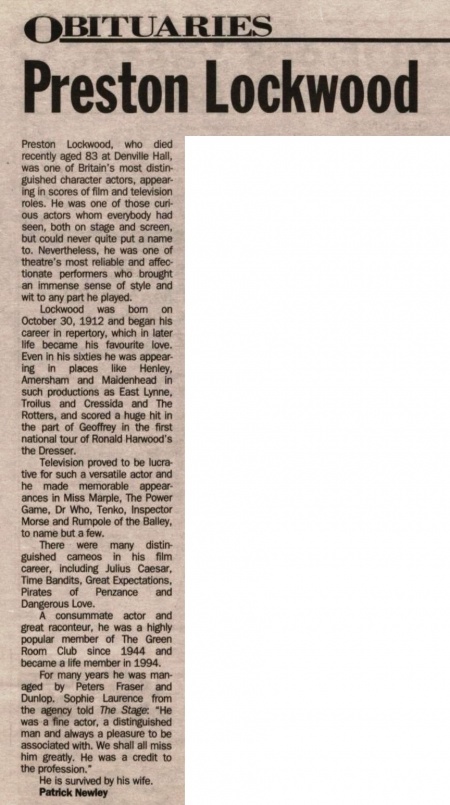 Preston Lockwood, who died recently aged 83 at Denville Hall, was one of Britain's most distinguished character actors, appearing in scores of film and television roles. He was one of those curious actors whom everybody had seen, both on stage and screen, but could never quite put a name to. Nevertheless, he was one of theatre's most reliable and affectionate performers who brought an immense sense of style and wit to any part he played.

Lockwood was bum on October 30, 1912 and began his career in repertory, which in later life became his favourite love. Even in his sixties he was appearing in places like Henley, Amersham and Maidenhead in such productions as East Lynne. Troilus and Cressida and The Rotters, and scored a huge hit in the part of Geoffrey in the first national tour of Ronald Harwood's the Dresser.

Television proved to be lucrative for such a versatile actor and he made memorable appearances in Miss Marple, The Power Game, Dr Who, Tenko, Inspector Morse and Rumpole of the Bailey, to name but a few.

There were many distinguished cameos in his film career, including Julius Caesar, Time Bandits, Great Expectations, Pirates of Penzance and Dangerous Love.

A consummate actor and great raconteur, he was a highly popular member of The Green Room Club since 1944 and became a life member in 1994.

For many years he was managed by Peters Fraser and Dunlop. Sophie Laurence from the agency told The Stage: "He was a fine actor, a distinguished man and always a pleasure to be associated with. We shall all miss him greatly. He was a credit to the profession."

He is survived by his wife.