Prisoners of the Daleks 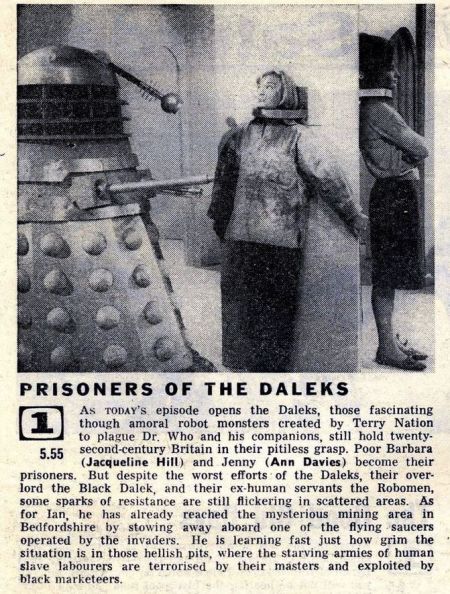 As TODAY'S episode opens the Daleks, those fascinating though amoral robot monsters created by Terry Nation to plague Dr. Who and his companions, still hold twenty-second-century Britain in their pitiless grasp. Poor Barbara (Jacqueline Hill) and Jenny (Ann Davies) become their prisoners. But despite the worst efforts of the Daleks, their overlord the Black Dalek, and their ex-human servants the Robomen, some sparks of resistance are still flickering in scattered areas. As for Ian, he has already reached the mysterious mining area in Bedfordshire by stowing away aboard one of the flying - saucers operated by the invaders. He is learning fast just how grim the situation is in those hellish pits, where the starving armies of human slave labourers are terrorised by their masters and exploited by black marketeers.