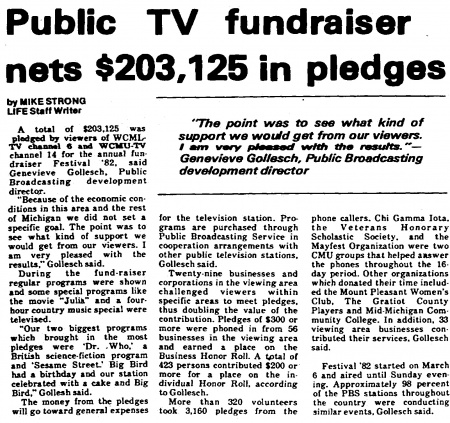 A total of $203,125 was pledged by viewers of WCML-TV channel 6 and WCMU-TV channel 14 for the annual fundraiser Festival '82, said Genevieve Gollesch. Public Broadcasting development director.

"Because of the economic conditions in this area and the rest of Michigan we did not set a 'specific goal. The point was to see what kind of support we would get from our viewers. I am very pleased with the results," Gollesch said.

During the fund-raiser regular programs were shown and some special programs like the movie "Julie and a four-hour country music special were televised.

"Our two biggest programs which brought in the most pledges were 'Dr. Who,' a British science-fiction program and 'Sesame Street' Big Bird had a birthday and our station celebrated with a take and Big Bird," Gollesh said.

The money from the pledges will go toward general expenses for the television station. Programs are purchased through Public Broadcasting Service in cooperation arrangements with other public television stations, Gollesch said.

Twenty-nine businesses and corporations in the viewing area challenged viewers within specific areas to meet pledges, thus doubling the value of the contribution. Pledges of $300 or more were phoned in from 56 businesses in the viewing area and earned a place on the Business Honor Roll. A total of 423 persons contributed $200 or more for a place on the individual Honor Roil, according to Gollesch.

Festival '82 started on March 6 and aired until Sunday evening. Approximately 98 percent of the PBS stations throughout the country were conducting similar events, Gollesch said.