Public broadcasting is going down the tube 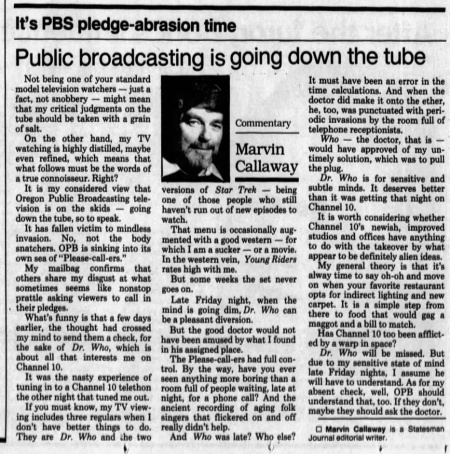 Not being one of your standard model television watchers — just a fact, not snobbery — might mean that my critical judgments on the tube should be taken with a grain of salt.

On the other hand, my TV watching is highly distilled, maybe even refined, which means that what follows must be the words of a true connoisseur. Right?

It is my considered view that Oregon Public Broadcasting television is on the skids — going down the tube, so to speak.

It has fallen victim to mindless invasion. No, not the body snatchers. OPB is sinking into its own sea of "Please-call-era."

My mailbag confirms that others share my disgust at what sometimes seems like nonstop prattle asking viewers to call in their pledges.

What's funny is that a few days earlier, the thought had crossed my mind to send them a check, for the sake of Dr. Who, which is about all that interests me on Channel 10.

It was the nasty experience of tuning in to a Channel 10 telethon the other night that tuned me out.

If you must know, my TV viewing includes three regulars when I don't have better things to do. They are Dr. Who and two versions of Star Trek — being one of those people who still haven't run out of new episodes to watch.

That menu is occasionally augmented with a good western — for which I am a sucker — or a movie. In the western vein, Young Riders rates high with me.

But some weeks the set never goes on.

Late Friday night, when the mind is going dim, Dr. Who can be a pleasant diversion.

But the good doctor would not have been amused by what I found in his assigned place.

The Please-call-ers had full control. By the way, have you ever seen anything more boring than a room full of people waiting, late at night, for a phone call? And the ancient recording of aging folk singers that flickered on and off really didn't help.

And Who was late? Who else?

It must have been an error in the time calculations. And when the doctor did make it onto the ether, he, too, was punctuated with periodic invasions by the room full of telephone receptionists.

Who — the doctor, that is — would have approved of my untimely solution, which was to pull the plug.

Dr. Who is for sensitive and subtle minds. It deserves better than it was getting that night on Channel 10.

It is worth considering whether Channel 10's newish, improved studios and offices have anything to do with the takeover by what appear to be definitely alien ideas.

My general theory is that it's alway time to say oh-oh and move on when your favorite restaurant opts for indirect lighting and new carpet. It is a simple step from there to food that would gag a maggot and a bill to match.

Has Channel 10 too been afflicted by a warp in space?

Dr. Who will be missed. But due to my sensitive state of mind late Friday nights, I assume he will have to understand. As for my absent check, well, OPB should understand that, too. If they don't, maybe they should ask the doctor.