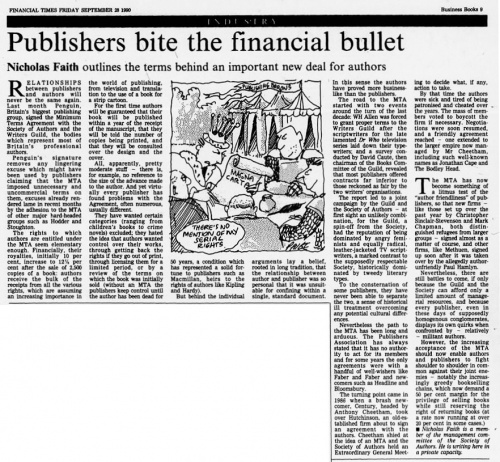 RELATIONSHIPS between publishers and authors will never be the same again. Last month Penguin, Britain's biggest publishing group, signed the Minimum Terms Agreement with the Society of Authors and the Writers Guild, the bodies which represent most of Britain's professional authors.

Penguin's signature removes any lingering excuse which might have been used by publishers claiming that the MTA imposed unnecessary and uncommercial terms on them, excuses already rendered lame in recent months by the adhesion to the MTA of other major hard-headed groups such as Hodder and Stoughton.

The rights to which authors are entitled under the MTA seem elementary enough. Financially, their royalties, initially 10 per cent, increase to 12 1/2 per cent after the sale of 2,500 copies of a book: authors receive the bulk of the receipts from all the various rights, which are assuming an increasing importance in the world of publishing, from television and translation to the use of a book for a strip cartoon.

For the first time authors will be guaranteed that their book will be published within a year of the receipt of the manuscript, that they will be told the number of copies being printed, and that they will be consulted over the design and the cover.

All, apparently, pretty moderate stuff - there is, for example, no reference to the size of the advance made to the author. And yet virtually every publisher has found problems with the Agreement, often numerous, usually different.

They have wanted certain categories (ranging from children's books to crime novels) excluded; they hated the idea that authors wanted control over their works, through getting back the rights if they go out of print, through licensing them for a limited period, or by a review of the terms on which the book was initially sold (without an MTA the publishers keep control until the author has been dead for 50 years, a condition which has represented a solid fortune to publishers such as Macmillan, heirs to the rights of authors like Kipling and Hardy).

But behind the individual arguments lay a belief, rooted in long tradition, that the relationship between author and publisher was so personal that it was unsuitable for confining within a single, standard document. In this sense the authors have proved more business-like than the publishers.

The road to the MTA started with two events around the turn of the last decade: WH Allen was forced to grant proper terms to the Writers Guild after the scriptwriters for the late lamented Dr Who television series laid down their typewriters; and a survey conducted by David Caute, then chairman of the Books Committee of the Guild, revealed that most publishers offered contracts far inferior to those reckoned as fair by the two writers' organisations.

The report led to a joint campaign by the Guild and the Society of Authors - at first sight an unlikely combination, for the Guild, a spin-off from the Society, had the reputation of being dominated by angry feminists and equally radical, leather-jacketed TV script-writers, a marked contrast to the supposedly respectable Society, historically dominated by tweedy literary types.

To the consternation of some publishers, they have never been able to separate the two, a sense of historical ill treatment overcoming any potential cultural differences.

Nevertheless the path to the MTA has been long and arduous. The Publishers Association has always stated that it has no authority to act for its members and for some years the only agreements were with a handful of well-wishers like Faber and Faber and newcomers such as Headline and Bloomsbury.

The turning point came in 1986 when a brash newcomer, Century, headed by Anthony Cheetham, took over Hutchinson, an old-established firm about to sign an agreement with the authors. Cheetham shied at the idea of an MTA and the Society of Authors held an Extraordinary General Meeting to decide what, if any, action to take.

By that time the authors were sick and tired of being patronised and cheated over the years. The mass of members voted to boycott the firm if necessary. Negotiations were soon resumed, and a friendly agreement reached - one ex-tended to the larger empire now managed by Mr Cheetham, including such well-known names as Jonathan Cape and The Bodley Head.

The MTA has now become something of a litmus test of the 'author friendliness' of publishers, so that new firms - like those set up over the past year by Christopher Sinclair-Stevenson and Mark Chapman, both distinguished refugees from larger groups - signed almost as a matter of course, and other firms, like Methuen, signed up soon after it was taken over by the allegedly author-unfriendly Paul Hamlyn.

Nevertheless, there are still battles to come, if only because the Guild and the Society can afford only a limited amount of managerial resources, and because every publisher, even in these days of supposedly homogenous conglomerates, displays its own quirks when confronted by - relatively - militant authors.

However, the increasing acceptance of the MTA should now enable authors and publishers to fight shoulder to shoulder in common against their joint enemies - notably the increasingly greedy bookselling chains, which now demand a 50 per cent margin for the privilege of selling books while still reserving the right of returning books (at a rate now running at over 20 per cent in some cases.)

Nicholas Faith is a member of the management committee of the Society of Authors. He is writing here in a private capacity.