Queue up, said the Daleks 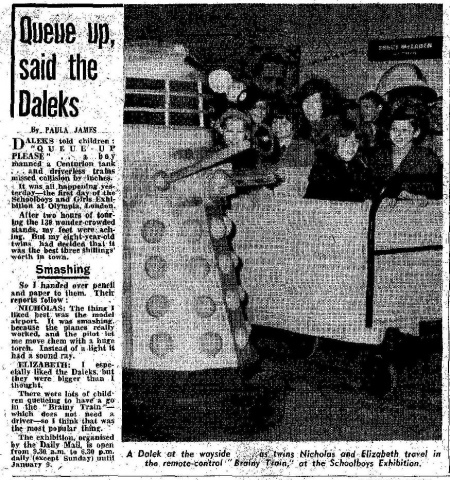 It was all happening yesterday-- the first day of the Schoolboys and Girls Exhibition at Olympia, London.

After two hours of touring the wonder-crowded stands, my feet were aching. But my eight-year-old twins had decided that it was the best three shillings' worth in town.

So I handed over pencil and paper to them. Their reports follow:

NICHOLAS: The thing I liked best was the model airport. It was smashing because the planes really worked, and the pilot let me move them with a huge torch. Instead of a light it had a sound ray.

ELISABETH: I especially liked the Daleks, but they were bigger than I thought.

There were lots of children queueing to have a go in the "Brainy Train"-- which does not need a driver--so I think that was the most popular thing.

Caption: A Dalek at the wayside ... as twins Nicholas and Elizabeth travel in the remote-control "Brainy Train," at the Schoolboys Exhibition.