Rave from the cave 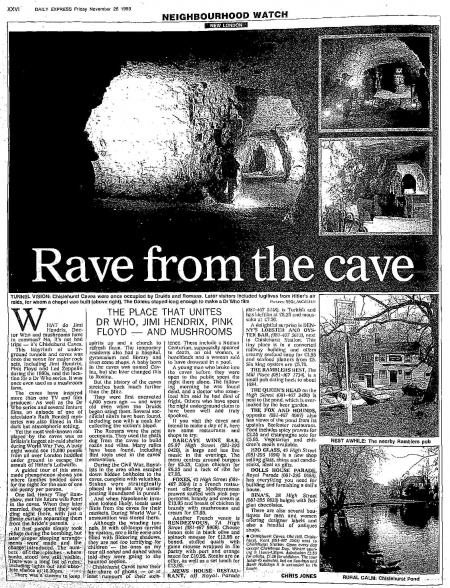 THE PLACE THAT UNITES DR WHO, JIMI HENDRIX, PINK FLOYD AND MUSHROOMS

WHAT do Jimi Hendrix, Doctor Who and mushrooms have in common? No, it's not bad trips — it's Chislehurst Caves.

This labyrinth of underground tunnels and caves was once the venue for major rock acts, including Jimi Hendrix, Pink Floyd and Led Zeppelin during the 1960s, and the location for a Dr Who series. It was once even used as a mushroom farm.

The caves have inspired more than one TV and film producer. As well as the Dr Who series and several feature Films, an episode of one of television's Ruth Rendell mysteries was .also filmed in this dark but atmospheric setting.

Yet the most well-known role played by the caves was as Britain's largest air-raid shelter during World War Two. A busy night would see 15,000 people from all over London huddled under ground to escape the assault of Hitler's Luftwaffe.

'A guided tour of this man-made phenomenon shows you where families bedded down for the night for the sum of one old' penny per person.

One lad, Henry 'Tiny' Ramshaw, met his future wife Pearl in the caves. When they later married, they. spent, their wedding night, there, with just a flimsy curtain separating them from the, bride's parents.

At first people simply took refuge during the bombing, but later proper sleeping arrangements were made and the charge introduced. The numbers of the pitches where bunks stood are still visible. There was a long list of rules, including lights out and absolute silence at 10.30pm.

There was a cinema to keep spirits up and a church to refresh them. The temporary residents also had a hospital, gymnasium and library and even some shops. A baby born in the caves was named Cav-Ma, but she later changed this to Rosina.

But the history of the caves stretches back much further than the Blitz.

They were first excavated 4,000 years ago — and were old even when the Druids began using them. Several sacrificial altars have been found, including one with a nook for collecting the victim's blood.

The Romans were the next occupants. They used the chalk dug from the caves to build roads and villas. Many relics have been found, including flint tools used in the caves' excavation.

During the Civil War, Royalists in the area often escaped down hidden boltholes to the caves, complete with valuables, Stakes were strategically placed to impale any unsuspecting Roundhead in pursuit.

And when Napoleonic invasion looked likely, locals used flints from the caves for their muskets. During World War I, ammunition was stored there.

Although the winding tunnels, lit with oil-lamps carried by visitors, are a little eerie and filled with flickering shadows, they are not too terrifying, for children -- the ones on my tour all oohed and aahed when told they were going to the haunted section.

Chislehurst Caves have their fair share of ghosts -- or at least rumours of their existence. These include a Roman Centurion, supposedly speared to death, an old woman, a hunchback and a woman said to have drowned in a pool.

A young man who broke into the caves before they were open to the public spent the night there alone. The following morning he was found dead, and a doctor who examined him said he had died of fright.. Others who have spent the night underground claim to have been well and truly spooked.

UNNEL VISION: Chislehurst Caves were once occupied by Druids and Romans. Later visitors Included fugitives from Hitler's air raids, for whom a chapel was built (above right). The Daleks stayed long enough to make a Dr Who film