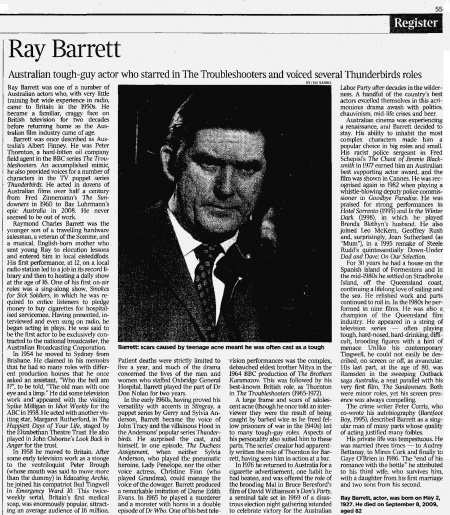 Ray Barrett was one of a number of Australian actors who, with very little training but wide experience in radio, came to Britain in the 1950s. He became a familiar, craggy face on British television for two decades before returning home as the Australian film industry came of age.

Barrett was once described as Australia's Albert Finney. He was Peter Thornton, a hard-bitten oil company field agent in the BBC series The Troubleshooters.

An accomplished mimic, he also provided voices for a number of characters in the TV puppet series Thunderbirds. He acted in dozens of Australian films over half a century from Fred Zinnemann's The Sundowners in 1960 to Baz Luhrmann's epic Australia in 2008. He never seemed to be out of work.

Raymond Charles Barrett was the younger son of a travelling hardware salesman, a veteran of the Somme, and a musical, English-born mother who sent young Ray to elocution lessons and entered him in local eisteddfods. His first performance, at 12, on a local radio station led to a job in its record library and then to hosting a daily show at the age of 16. One of his first on-air roles was a sing-along show, Smokes for Sick Soldiers, in which he was required to entice listeners to pledge money to buy cigarettes for hospitalised servicemen. Having presented, interviewed and even sung on radio, he began acting in plays. He was said to be the first actor to be exclusively contracted to the national broadcaster, the Australian Broadcasting Corporation.

In 1954 he moved to Sydney from Brisbane. He claimed in his memoirs that he had so many roles with different production houses that he once asked an assistant, "Who the hell am I?", to be told, "The old man with one eye and a limp." He did some television work and appeared with the visiting Spike Milligan in Idiot Weekly for the ABC in 1958. He acted with another visiting star, Margaret Rutherford, in The Happiest Days of Your Life, staged by the Elizabethan Theatre Trust. He also played in John Osborne's Look Back in Anger for the trust.

In 1958 he moved to Britain. After some early television work as a stooge to the ventriloquist Peter Brough (whose mouth was said to move more than the dummy) in Educating Archie, he joined his compatriot Bud Tingwell in Emergency Ward 10. This twice-weekly serial, Britain's first medical soap, was enormously popular, attracting an average audience of 16 million.

Patient deaths were strictly limited to five a year, and much of the drama concerned the lives of the men and women who staffed Oxbridge General Hospital. Barrett played the part of Dr Don Nolan for two years.

In the early 1960s, having proved his versatility with accents in Stingray, a puppet series by Gerry and Sylvia Anderson, Barrett became the voice of John Tracy and the villainous Hood in the Andersons' popular series Thunderbirds.

He surprised the cast, and himself, in one episode, The Duchess Assignment, when neither Sylvia Anderson, who played the pneumatic heroine, Lady Penelope, nor the other voice actress, Christine Finn (who played Grandma), could manage the voice of the dowager. Barrett produced a remarkable imitation of Dame Edith Evans. In 1965 he played a murderer and a monster with horns in a double episode of Dr Who. One of his best television performances was the complex, debauched eldest brother Mitya in the 1964 BBC production of The Brothers Karamazov. This was followed by his best-known British role, as Thornton in The Troubleshooters (1965-1972).

A large frame and scars of adolescent acne (though he once told an interviewer they were the result of being caught by barbed wire as he freed fellow prisoners of war in the 1940s) led to many tough-guy roles. Aspects of his personality also suited him to these parts. The series' creator had apparently written the role of Thornton for Barrett, having seen him in action at a bar. In 1976 he returned to Australia for a cigarette advertisement, one habit he had beaten, and was offered the role of the brooding Mal in Bruce Beresford's film of David Williamson's Don's Party, a seminal tale set in 1969 of a disastrous election night gathering intended to celebrate victory for the Australian Labor Party after decades in the wilderness.

A handful of the country's best actors excelled themselves in this acrimonious drama awash with politics, chauvinism, mid-life crises and beer.

Australian cinema was experiencing a renaissance, and Barrett decided to stay. His ability to inhabit the most complex characters made him a popular choice in big roles and small. His racist police sergeant in Fred Schepisi's The Chant of Jimmie Blacksmith in 1977 earned him an Australian best supporting actor award, and the film was shown in Cannes. He was recognised again in 1982 when playing a whistle-blowing deputy police commissioner in Goodbye Paradise. He was praised for strong performances in Hotel Sorrento (1995) and In the Winter Dark (1998), in which he played Brenda Blethyn's husband. He also joined Leo McKern, Geoffrey Rush and, surprisingly, Joan Sutherland (as "Mum"), in a 1995 remake of Steele Rudd's quintessentially Down-Under Dad and Dave: On Our Selection.

For 30 years he had a house on the Spanish island of Formentera and in the mid-1980s he settled on Stradbroke Island, off the Queensland coast, continuing a lifelong love of sailing and the sea. He relished work and parts continued to roll in. In the 1980s he performed in nine films. He was also a champion of the Queensland film industry. He appeared in a string of television series - often playing tough, hard-nosed, hard-drinking, difficult, brooding figures with a hint of menace. Unlike his contemporary Tingwell, he could not easily be described, on screen or off, as avuncular. His last part, at the age of 80, was Ramsden in the sweeping Outback saga Australia, a neat parallel with his very first film, The Sundowners. Both were minor roles, yet his screen presence was always compelling. The crime writer Peter Corris, who co-wrote his autobiography (Barefoot Boy, 1995), described Barrett as a singular man of many parts whose quality of acting justified many foibles.

His private life was tempestuous. He was married three times - to Audrey Bettanay, to Miren Cork and finally to Gaye O'Brien in 1986. The "end of his romance with the bottle" he attributed to his third wife, who survives him, with a daughter from his first marriage and two sons from his second.