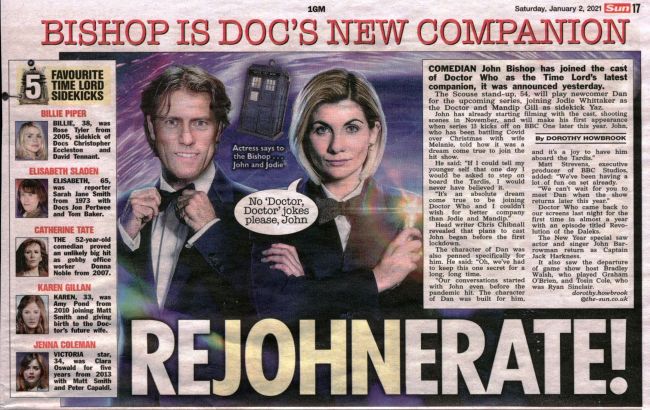 COMEDIAN John Bishop has joined the cast of Doctor Who as the Time Lord's latest companion, it was announced yesterday.

The Scouse stand-up, 54, will play newcomer Dan for the upcoming series, joining Jodie Whittaker as the Doctor and Mandip Gill as sidekick Yaz.

John has already starting filming with the cast, shooting scenes in November, and will make his first appearance when series 13 kicks off on BBC One later this year. John, who has been battling Covid over Christmas with wife By DOROTHY HOWBROOK Melanie, told how it was a dream come true to join the hit show.

He said: "If I could tell my younger self that one day I would be asked to step on board the Tardis, I would never have believed it.

"It's an absolute dream come true to be joining Doctor Who and I couldn't wish for better company than Jodie and Mandip."

The character of Dan was also penned specifically for him. He said: "Oh, we've had to keep this one secret for a long, long time.

"Our conversations started with John even before the pandemic hit. The character of Dan was built for him, and it's a joy to have him aboard the Tardis."

Matt Strevens, executive producer of BBC Studios, added: "We've been having a lot of fun on set already.

"We can't wait for you to meet Dan when the show returns later this year."

Doctor Who came back to our screens last night for the first time in almost a year with an episode titled Revolution of the Daleks.

It also saw the departure of game show host Bradley Walsh, who played Graham O'Brien, and Tosin Cole, who was Ryan Sinclair.

Caption: Actress says to the Bishop ... John and Jodie

BILLIE, 38, was Rose Tyler from 2005, sidekick of Docs Christopher Eccleston and David Tennant.

KAREN, 33, was Amy Pond from 2010 joining Matt Smith and giving birth to the Doctor's future wife.

VICTORIA star, 34, was Clara Oswald for five years from 2013 with Matt Smith and Peter Capaldi.