Return of Dr Who 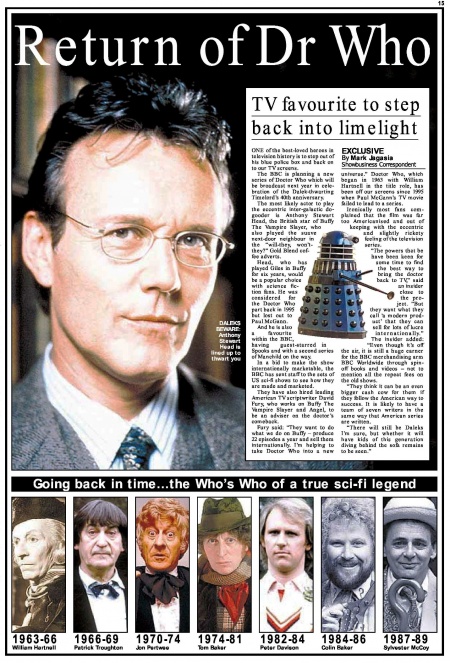 TV favourite to step back into limelight

ONE of the best-loved heroes in television history is to step out of his blue police box and back on to our TV screens.

The BBC is planning a new series of Doctor Who which will be broadcast next year in celebration of the Dalek-thwarting Timelord's 40th anniversary.

The most likely actor to play the eccentric inter-galactic do-gooder is Anthony Stewart Head, the British star of Buffy The Vampire Slayer, who also played the suave next-door neighbour in the "will-they, won't-they?" Gold Blend coffee adverts.

Head, who has played Giles in Buffy for six years, would be a popular choice with science fiction fans. He was considered for the Doctor Who part back in 1995 but lost out to Paul McGann.

And he is also a favourite within the BBC, having guest-starred in Spooks and with a second series of Manchild on the way.

In a bid to make the show internationally marketable, the BBC has sent staff to the sets of US sci-fi shows to see how they are made and marketed.

They have also hired leading American TV scriptwriter David Fury, who works on Buffy The Vampire Slayer and Angel, to be an adviser on the doctor's comeback.

Fury said: "They want to do what we do on Buffy — produce 22 episodes a year and sell them internationally. I'm helping to take Doctor Who into a new universe." Doctor Who, which began in 1963 with William Hartnell in the title role, has been off our screens since 1995 when Paul McGann's TV movie failed to lead to a series.

Ironically most fans complained that the film was far too Americanised and out of keeping with the eccentric and slightly rickety feeling of the television series.

"The powers that be have been keen for some time to find the best way to bring the doctor back to TV," said an insider close to the project. "But they want what they call 'a modern product' that they can sell for lots of lucre internationally." The insider added:

"Even though it's off the air, it is still a huge earner for the BBC merchandising arm BBC Worldwide through spinoff books and videos — not to mention all the repeat fees on the old shows.

"They think it can be an even bigger cash cow for them if they follow the American way to success. It is likely to have a team of seven writers in the same way that American series are written.

"There will still be Daleks I'm sure, but whether it will have kids of this generation diving behind the sofa remains to be seen."

Going back in time...the Who's Who of a true sci-fi legend

Caption: DALEKS BEWARE: Anthony Stewart Head is lined up to thwart you